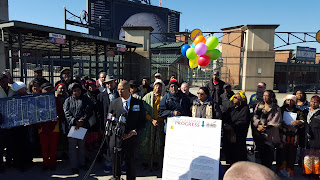 Turner Field Community Benefits Coalition, which represents the neighborhoods of Summerhill, Mechanicsville, Peoplestown, Pittsburgh and others nearby Turner Field, has approved a historic Community Benefits Platform.
Today the coalition, which American Firends Service Committe is proud to be a part of, held a press conference to release their platform at the very site of past and future development, Turner Field. Over 50 residents from the neighborhoods surrounding the baseball staduim showed up along with allie organizations and elected officials. The mood was celebratory yet was not without a very serious sense of urgency. the urgencey surround the pending sales contract for the land that Turner Field sits on today, which could happen any day now. 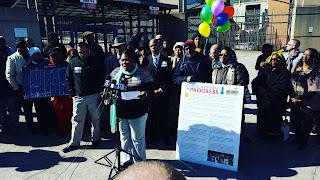 The Atlanta Fulton County Recreation Authority(AFCRA) has the power to include a binding agreement that would require the developer to negotiate with the community on a community benefits agreement. AFCRA has a unique and historic opportunity to ensure that the development of the area benefits everyone. 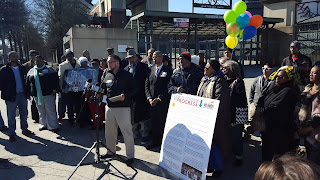 The Platform was guided by months of work and results from a survey which thousands from the community participated in.  “We are excited that we have been able to unite the neighborhoods surrounding Turner Field and the institutions, Churches, and organizations with one voice.” Said Coalition member and longtime Peoplestown resident Alison Johnson. Alison added, “My family has lived in Peoplestown for eighty years, and we don't want to be driven out by development. After decades of development projects that have hurt our communities we are excited about the opportunity to finally get it right”

“As the sale contract is set to be signed between the Atlanta Fulton County Recreational Authority(AFCRA) and the developer, we’re hopeful that AFCRA will include a binding requirement that the developer must negotiate a Community Benefits Agreement with the coalition” said Mechanicsville resident Jason Dozier adding, “They have the power to set us off on the path to building a community that works for all of us”.

The coalition plans to have three or four dozen residents out for the press conference. They will be joined by ally groups including several GSU student groups. The press conference will be short, spirited, visually striking, and press packets will be available. 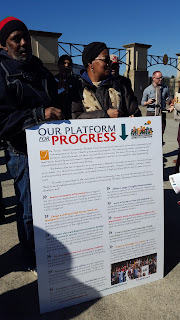 Summerhill resident John Colabelli had this to say about the Community Benefits Platform, "The many voices are coming together as one.The Community Benefits Platform is the embodiment of those voices.It is the Bill of Rights through which we proclaim our wants, our needs, and our desires for what the future of the area will be.It is our Statement of Inclusion that we the people have a stake in this project.Just look around at the legacy of non-inclusive decisions where the few dictate what happens.Empty lots, empty buildings and empty promises.This however is a new day where we put that reality behind us."
Posted by Atlanta Economic Justice Program/AFSC at 6:20 PM