Sleeping on the Steps Of Atlanta City Hall 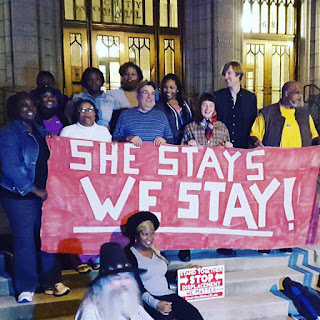 "When the Mayor decided Ms. Mattie's home can stay, he acknowledged  that flooding in Peoplestown can be addressed without demolishing an entire block in Peoplestown", stated homeowner Tanya Washington, whose home is one of the homes slated to be demolished.

The remaining residents whose homes bookend the block are requesting that the Mayor direct the Department of Watershed to amend the plan so they can also stay in their homes. 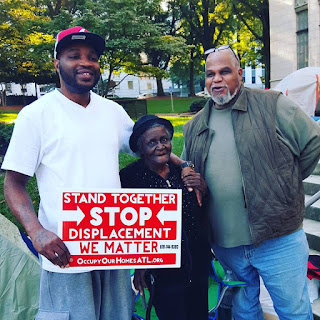 Last night, the residents and their supporters  held a rally and camped out all night on the steps of City Hall to emphasize the point that if Ms. Mattie stays they stay.  American Friends Service Committee was excited to be the in support along with leaders from Occupy Our Homes Atlanta. Most who committed to stay though the night had never done anything like it before and what was initial nervousness about the bold tactic quickly turned into the joy that often comes with participating in collective action driven by a righteous goal; in this case, saving the homes of residents that helped build the community they love. 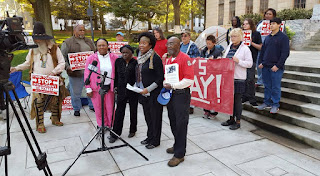 After holding a 10 am press conference this morning they presented a letter to the Mayor, supported by a petition with 5394 signatures, respectfully requesting that he meet with them to address their right to also stay in their homes. 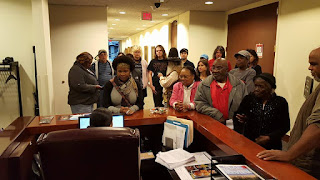 Ms Mattie joined them in solidarity and told her City Council Representative, Carla Smith, that she wants her neighbors to be treated as fairly as she's been treated.

The Mayor's office refused to even schedule a meeting with the residents, who had camped out all night in anticipation of getting some word from the mayors office about their homes.  The residents and their supporters plan  to return to the Mayor to demand the meeting which he promised.

"We've been here going on 30 years, we've raised our children and our grandchildren here. This is our home and we have no intention of leaving", state Bertha Darden who lives in one of the homes in question with her husband Robert Darden.

We are of course disappointed with Mayor Reed's continued dismissive stance towards these Peoplestown residents but we remain hopeful that he will do right by them as he did right by Mattie. After last night a few things are clear. This fight will not go away, it will continue to escalate as residents make it clear they will not leave their homes. It also seems clear that these residents have already won and they know it, their supporters know it, it's just going to take city council and Mayor Reed some time and possibly more creative direct action to figure it out.
Posted by Atlanta Economic Justice Program/AFSC at 4:04 PM