Civil Disobedience at the Georgia Capitol


Last year Georgia lawmakers failed to expand Medicaid in our state, falsely claiming that Georgia couldn’t afford it. Over a year later the results have been disastrous. The four rural hospitals listed that Medicaid Expansion would have kept open have been forced to close their doors Charlton Memorial Hospital, Folkston Ga, Hancock Memorial Hospital, Sparta Ga, Lower Oconee Hospital, Glenwood Ga, Stewart Webster Hospital, Richland Ga. According to the Institute of Southern Studies almost 1,200 Georgians needlessly died in 2014 along because Medicaid was not expanded.

An estimated 650k regular everyday Georgians, like Athens resident Adam Lassila, could receive life saving preventative care with Medicaid Expansion. Adam, who will attend Monday's rally states, "I recently suffered a serious head injury. I was able to receive high quality health care without incurring thousands of dollars of debt only because I was lucky enough to hurt myself in Argentina, instead of my own state, whose stubborn and inhumane political ploys have thrust me into the horrible gap where the Medicaid expansion should be." 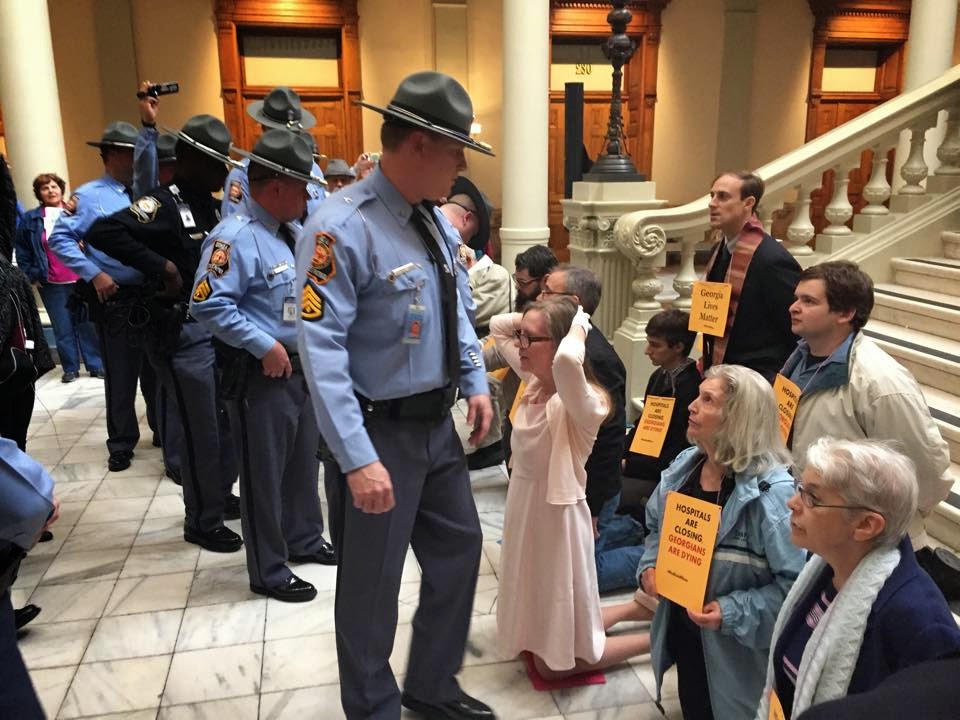 Photo by Jim Chambers
In an effort to curb the extreme forward motion toward a healthcare system that strongly resembles a third world nation, Moral Monday Georgia brought Georgians from around the state together Monday for a day of learning, lobbying, and bold direct action in the tradition of Kingian Nonviolence.

After a very spirited press conference inside the Georgia Capitol 12 Georgia residents, all part of the Moral Monday Georgia movement, went to their knees and blocked the south steps of the Capitol with a clear message, “Hospitals are closing, people are dying”. Sometimes we run out of words to say; we have made all the points there are to make; published all the reports about the healthcare crisis in Georgia. 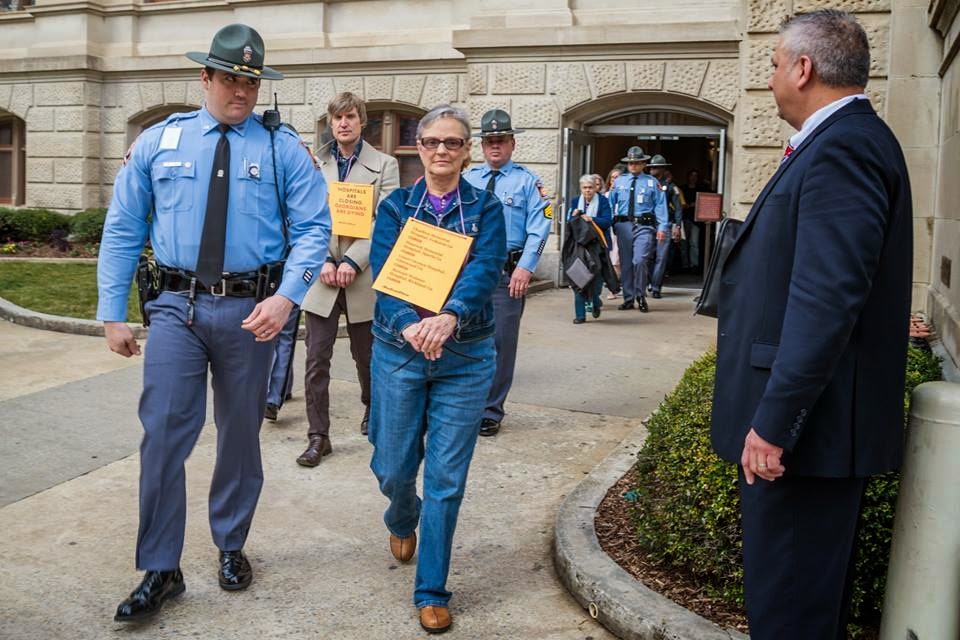 With Georgians who are loved and needed dying everyday and live saving hospitals shutting down we simply can’t afford to walk away from the fight to expand medicaid. Now is a time for bold drastic action. Monday’s arrestees ended up spending 17 hours in jail but in doing so forced the issue back into the spotlight in Georgia. We sincerely hope Georgians keep pushing; keep fighting; keep organizing for a state that puts real people before dogmatic politics.

We encourage those that can to contribute to the Georgia Civil Disobedience Fund to support bold actions like this.
Posted by Atlanta Economic Justice Program/AFSC at 2:02 AM