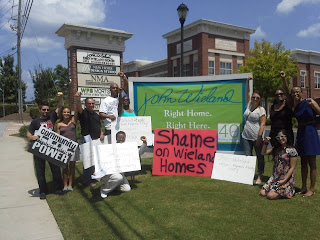 In 2006 Mike and Patrice Figaro spent most of their savings on a house in South Fulton County. When they arrived to Georgia from California to live in their new home, they were immediately confronted with a nightmare of a home. Their wiring was hazardous, causing hot water heaters, televisions, ovens, and a jacuzzi bathtub to blow out. They had designed the home to be handicap accessible for Patrice, so they had an elevator installed. The elevator promptly failed.

These issues all stemmed from the builder, John Wieland Homes. Mike and Patrice went to their County Commissioner, Bill Edwards, for support to right the wrongs that had been committed against them. The Commissioner held a meeting with the Figaros, Occupy Our Homes Atlanta members, county employees, and representatives from John Wieland Homes.

At the meeting Commissioner Edwards was very straightforward. He admitted on camera that there were serious issues with evident fraud on the certificate to occupy among other issues Figaros. Commissioner Edwards committed to look for into the case and meet again with more information, he also said that he would be willing to testify in court that there was wrong doing if it come down to it. Since then Edwards has back tracked, refused to meet, and has basically had his staff tell the Figaro’s that if they want more out of the County they can just file a lawsuit.

Why the change of tone? Well we know that John Wieland is the biggest home developer in the state of Georgia, and that come with a lot of power. Power to commit fraud and influence elected official with impunity. 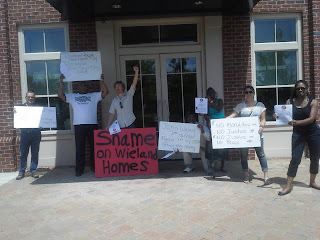 Today we took the fight right to John Wieland’s door step, making it clear that this will not go away until John Wieland Homes does the right thing and return the money they took from the Figaro's.

About a dozen people converged on John Wieland’s corporate offices today around 1pm with signs and leaflets to pass out to folks. We made it clear that we will continue to put pressure on John Wieland Homes until this issue is resolved. The sad truth is that John Wieland is one of the richest people in Atlanta and the Figaro’s lost all of their lifetime wealth purchasing what they thought would be their dream home from John Wieland.