$339 Million Being Held Back From Struggling Georgia Homeowners 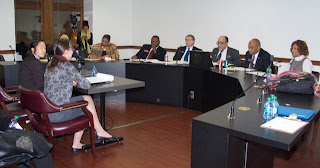 This past Wednesday State Senator Vincent Fort hosted a public hearing on unfair foreclosures and mortgage loans. Around ten other legislators joined Senator Fort for the hearing, which focused on exploring a few basic questions including; 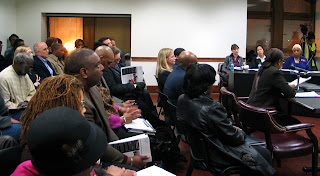 1) Why is the state failing to distribute $339 million(through HomeSafe Georgia) available to assist homeowners faced with foreclosure?
2) Why is Bank of America, and other financial institutions, not maintaining foreclosed homes in African-American neighborhoods, resulting in dwindling home values?
3) Why does Georgia have one of the highest foreclosure rates in the country?

A representative from Atlanta Legal Aid, Metro Fair Housing, and Myself testified at the hearing. The room was packed to standing room only with struggling residents, frustrated lawyers, and housing justice organizers from Occupy Our Homes Atlanta. 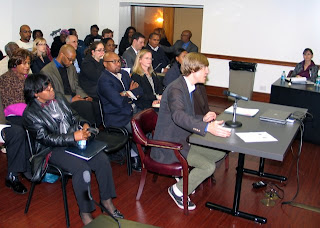 1. The Georgia HomeSafe program is a total failure at best, and likely a failure by design. 2% of the $339 million allocated for struggling homeowners has actually been given to struggling homeowners. Do to the heavy restrictions on who qualifies and the long time period it takes to process applications the overwhelming majority of folks that apply get no help.

2. Foreclosed vacant homes in low income communities, especially communities of color, are left to blight and decay, while foreclosed vacant properties in high income communities are kept maintained and beautiful. Metro Fair Housing has done extensive canvassing in Atlanta and their findings suggest an industry standard of disregarding low income vacant homes, leaving them to the elements, while meticulously maintaining in wealthy, mostly white neighborhoods.

3. Georgia's laws, legal system, and social programs have failed to help and/or protect Georgians against predatory lending, felony fraud in foreclosure cases, and the allocation of funds designated to help those struggling with housing.

While it's never to late to ask the politicians  and institutions who have the power to change our broken system, it seemed clear to most in attendance that in order to create the change our communities are starving for we need to take a bold, new, creative direction. Many suggested marching on the Government institution in charge of the HomeSafe Georgia program, Department of Community Affairs, and demanding access to the $339 Million that has already been designated for Georgians that were hardest hit by the housing crisis.

Let's be clear, the $339 million that has been allocated for struggling homeowners in Georgia, if actually given to them, is at best a band-aid; it's not the decomodification; it's not making sure everyone has a place to call home. When things are as bad as they are right now and we've already been given a band-aid, we should not be blocked by bureaucratic and bad intentions from using the ban-aid.

The sad fact is that while HomeSafe Georgia has held back funds that where supposed to go to the hardest hit, many of those who applied for the funds have lost their homes for good.