Thoughts On My Occupy Atlanta Arrest 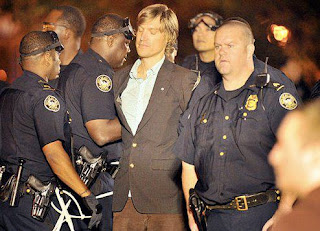 I'm on trial this week, and likely to take the stand today to testify about my October 25th arrest in the park. I've been reflecting a lot about my choice to stay in the park that night, and my reasons for joining the Occupy movement last year. Below are some of my thoughts:

There’s more than on reason I chose to remain in the park after 11pm October 25th last year.

First the obvious, I don’t believe the freedom of speech has a curfew, and our freedom to assemble applies at 12pm and 12am.

Both of these rights clearly trump a fairly recent Atlanta municipal code targeted at keeping the growing number of our cities homeless out of sight.

To be clear, the reason I joined the Occupy Movement was not too simply invoke my constitutional rights.
It is the unprecedented, historic wealth inequity that brought me and thousands into the movement.
Never has there been a stronger need to dramatize the injustice of our false economic crisis, never has there been so few who control and own so much and the symptoms are clear; from the explosion in the homeless population, lack of good jobs, plummeting wages for regular people while CEO compensation is at an all-time high, schools defunded, and more Georgians locked up than ever.

Occupy presented an opportunity to highlight, in a very visible way, our cities, our countries economic injustice which sees 1% of the population controlling an overwhelming amount of our resources.

I was called to the park because I believe we are not in a crisis of economic resource, but rather a crisis of economic priority. We are not broke, there is no fiscal cliff, it’s a moral one. There’s plenty to go around.
I was in the park because I believe we need a shift, a revolution of values. The sparks of the Occupy movement were very intentionally put out by heavy handed police tactics, infiltration of the movement on every level, targeted arrests and surveillance of individuals seen as leaders, and the eviction of our freedom of speech and freedom of assembly.
Posted by Atlanta Economic Justice Program/AFSC at 1:52 PM