An interesting thing happened on the way to Savannah, two of our arrestees decided to take a stand again. This time it wasn’t at the state capital or the governor’s mansion, it was instead it was in the neighborhood we were coming to visit for stop #9 of the Jailed for Justice Tour. Stop 9 in Savannah was by far our most eventful location! As two of our arrestees drove into town they identified a very apparently problem right in this neighborhood. We heard from Marcus Coleman and Joe Beasley who spoke about an injustice happening mere feet from where we had stood. 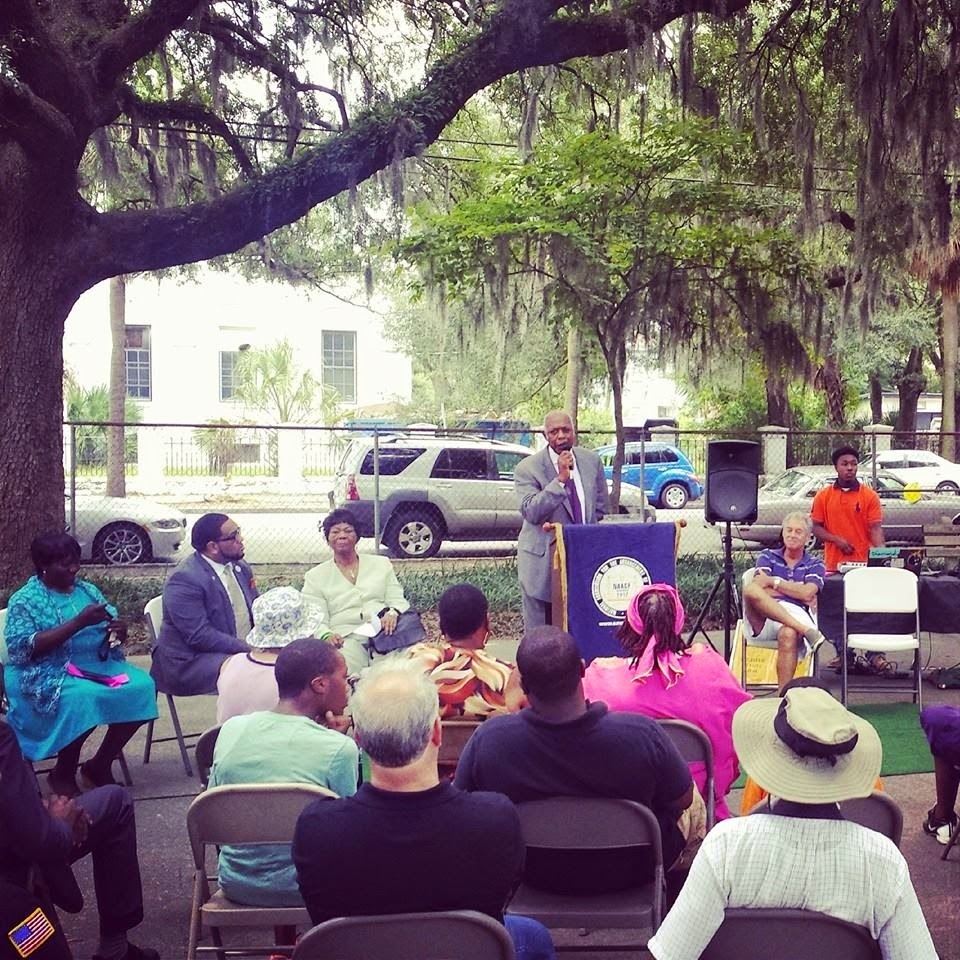 As they had come into town they stopped by a local convenience store and were incensed at what they found. A sign propped up outside, a supposed deterrent to shoplifting, in which lamented the owner’s struggles with shoplifting and the effect it has on his livelihood. There was not an objection to the owner trying to protect his business; there was however an objection to the manner in which this was conveyed to the community. For you see this owner’s sign also included a picture of a young black man behind bars.
Arrestee Marcus Coleman delivered an impassioned speech to the audience, “How can you go in there, and shop there, and let that be the message that is being sent to your neighborhood?” As he went on you could see the passion in his face and hear it in his voice. “Our young men need to know they are more than that, they can be more than that; they have to stop seeing these types of messages every day. A message that says you’re going to be nothing, you are going to fail.” Speaking to an audience and a group of younger children he spoke of the fact that in American 1 in 3 black men will go to prison in their lifetime. 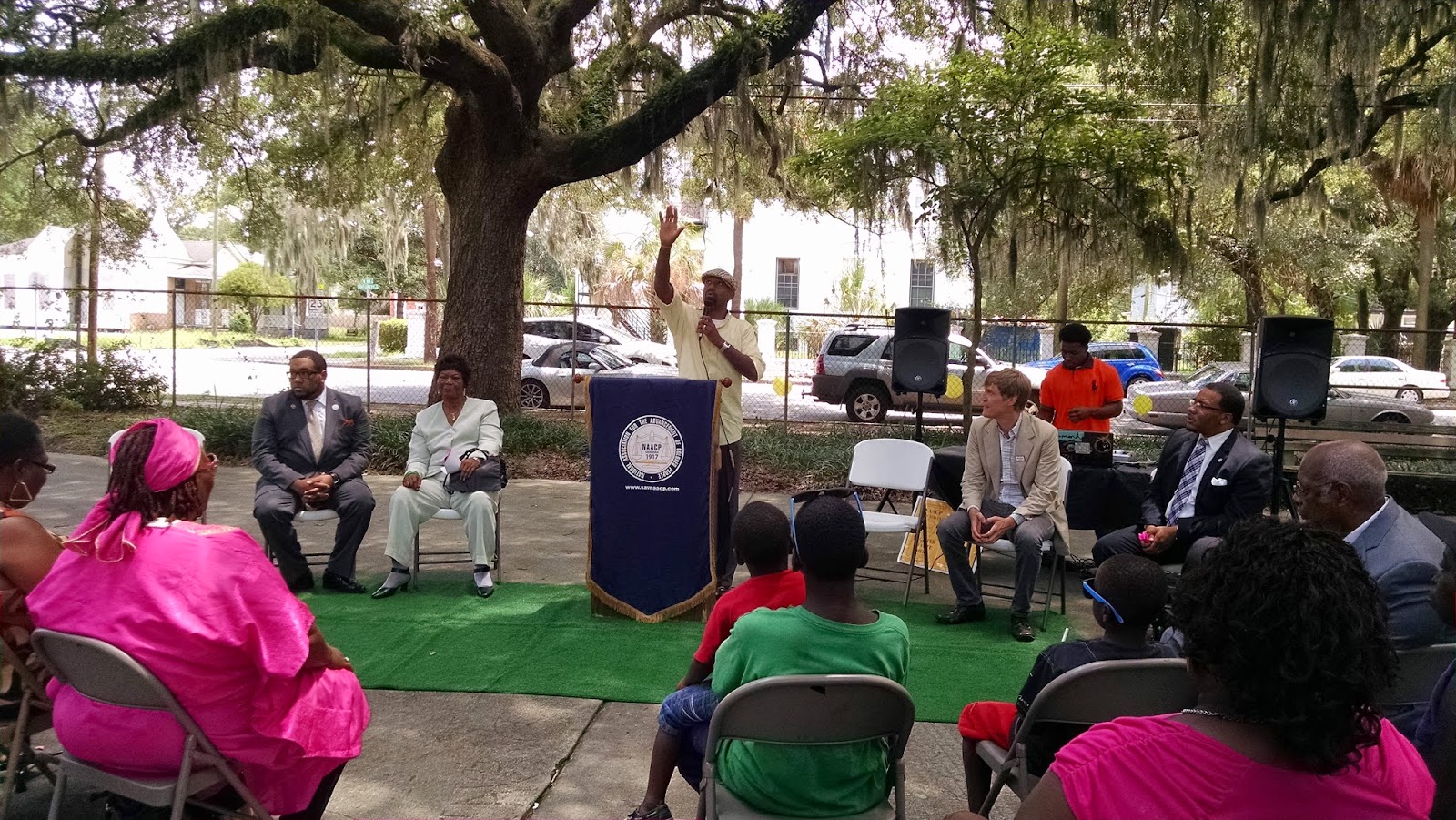 This seems to, unfortunately, fit right into some of the main concerns of Moral Monday. A concern that stems from a for profit prison system that makes their business off of incarceration, mostly the incarceration of young men of color and the poor. How can we live in a state where the prisons are being expanded and the state is guaranteeing they will fill those extra beds? What motivation is there for our society to rehabilitate these men and women and help them transition back into society? 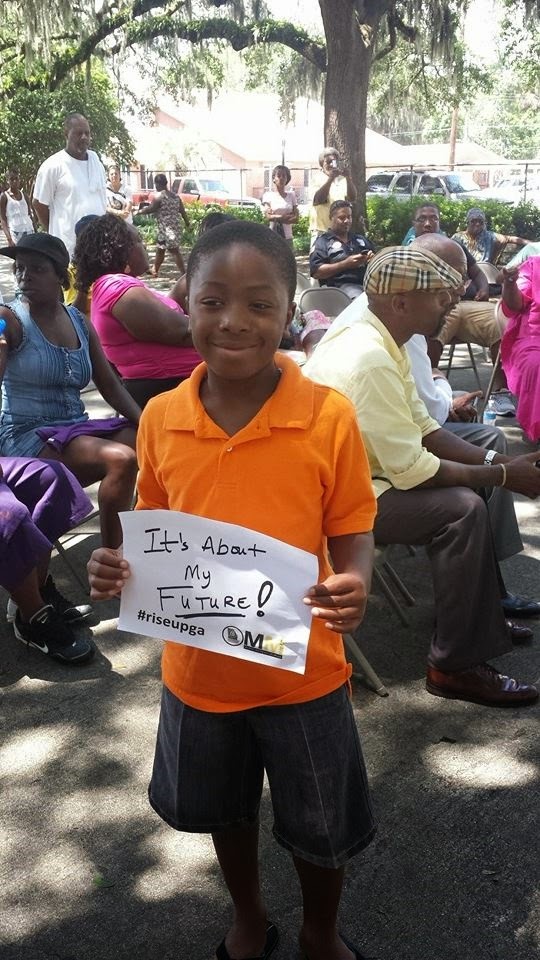 As brother Coleman pumped up the audience an amazing thing happened. Right there and then we were able to facilitate a positive change in the neighborhood. The owner of the store came out and apologized and pledged to remove the sign. They shook hands we were able to make an instant and positive change just by coming together and confronting a wrong. That is what Moral Monday is all about. This is about uniting together for a common cause, to stand up in the face of things that are wrong and say we aren’t going to tolerate it. Today Savannah took their stand, their first Moral Monday action was to send a more positive visual message to their neighborhood!