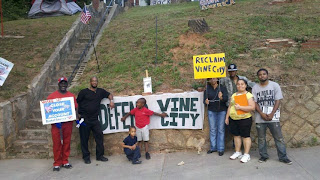 At one of our recent Vine City community meetings a few of the residents came up with a great action idea. The idea was to get together every Friday at 6pm and walk around the neighborhood as a group. The hope was to build relationships with each other, and to build awareness in the Vine City as to who we are, and why we're here, and how folks can plug in. 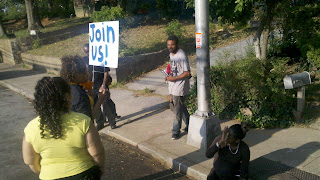 This past Friday  was the kick of Vine City walk, and though it was only around ten of use, it was really an awesome experience. Every one we walked by wanted to know what we were doing, residents actually came outside to engage with the group. As residents engaged, many ended up putting out their own ideas about the Vine City they want to live in, and perhaps what would be some collective steps to get there. 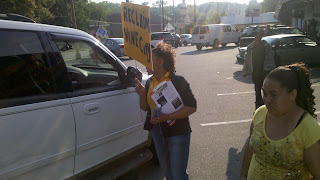 We've been canvassing Vine City for the past few weeks in pairs, Friday's walk really confirmed that there's power in numbers. 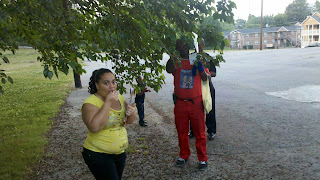 The walk not only was a great outreach tool, it also gave those of use who walked new perspectives on the neighborhood. A few Vine city residents who came on the walk commented, "we never walk the streets like this". We stopped several times to have long conversations with community members, survey an abandoned building, or to stop and eat mulberries. It should be noted that the overwhelming majority of Vine City residents really love the Occupy movement and are glad we are here.

Everyone was really excited to keep building this weekly tradition, and we invite you to join us every Friday at 6pm. We meet at the home of Pamela Flores, 245 Griffin St, Atlanta.