It's been such and eventful week in Vine City! With so much going on I've had a hard time making time to update this blog, so I'm going to try to include some of the highlights from the last week and end with a call to action. 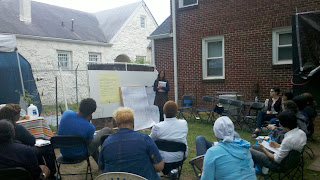 They've been great! It's really been awesome to see more and more Vine City residents engaging and relating with the Occupy Movement. At our last community meeting, after spending time exploring the institutions that have been attacking Vine City for decades, we asked residents if they saw connections between they systems of violence and oppression that have become common place in Vine City and beyond. Folks from the neighborhood had no problem drawing the connections between the school closings, financial institutions, police corruption, drug dealers, and homelessness.Folks in Vine City know what time it is. 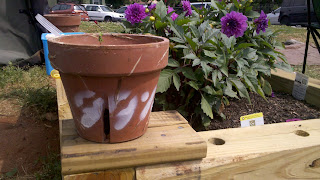 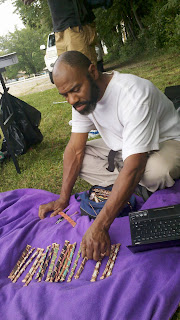 Several Occupiers had been working with Vine City residents for weeks to build an Earth day event and a Block party. One of the problems residents bring up often is the overwhelming presence of trash in the community and the effect it has on the psychology of neighborhood. It's a fact that abandoned buildings in lower income communities are way less likely to be tended to by the financial institutions that own them then abandoned buildings in wealthier neighborhoods. This fact is painfully obvious in Vine City. This past Friday 36 bags of trash were picked up along Joesph Lowery BLVD, and work was done on several Community Gardens. Saturday folks came out for food, games, friendship, and education. Higher Ground Empowerment Center played host to the event, and lots of kids from the community came out and had a great time. It was a reminder that in a time when we are all relegated to our separate lives, that simply creating space to enjoy our neighbors and learn from each other can be an act of resistance. 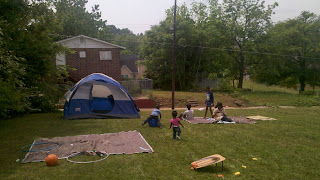 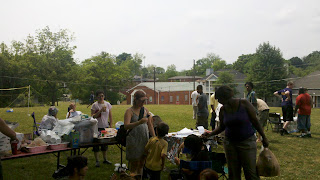 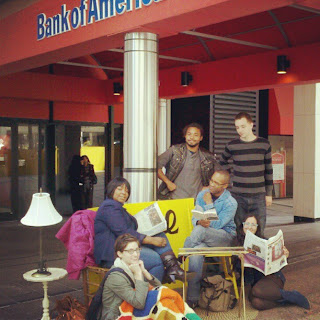 Not losing the fact that one of our main fronts of resistance in Vine City is the fight to save Pamela Flore's home from illegal foreclosure at the hands of Bank of America, we've decided to launch multiple small actions against the bank leading up to a larger action next Monday(4/30). Since bank of America has pushed millions out of their homes we've decided to make their front doors our homes. Our hope is to dramatize the crisis they have forced upon us all, and reach make it impossible for BoA and their customers to ignore injustice of historic mass evictions. At each action hundreds of info sheets were passed out and multiple customers marched into the bank with our flyers. Two costumers actually walked in and closed their accounts in protest. At today's bank action one homeowner decided to let the bank know that he was putting off paying his mortgage until BoA fixed Pamela Flore's mortgage

. On Monday April 30, the day before her house is set to be auctioned off, we'll be at the Bank of America Plaza in Midtown from 1:30-4pm with one simple message. Make a deal to keep Pamela Flores in her home! 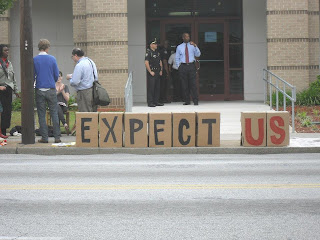 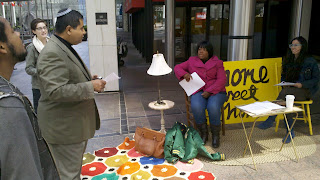