Occupy and Vine City Residents Take On Bank Of America 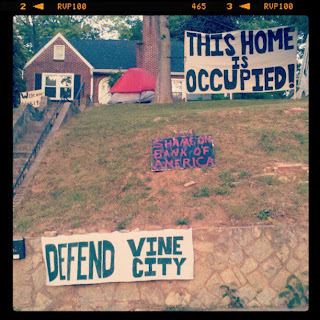 The foreclosure crisis hit Vine City hard. Now, only 15% of residents own their homes and many of them are facing hardship, like resident Pamela Flores whose property backs up to Martin Luther King III and City Councilman Michael Julian Bond’s home.

Pamela bought her home at an inflated amount in 2006, the height of the crime spree at the hands of American banking institutions. In 2009 she attempted to get a loan modification with Bank of America through the “Making Homes Affordable” program. The bank told her that in order to qualify she needed to miss 3-4 mortgage payments; this is a scam that has already put countless Americans out of their homes. During the time she missed payments, at the banks request and in order to meet the loan modification criteria, she fell into foreclosure. By qualifying for the “Making Homes Affordable” program foreclosure was temporarily avoided. Pamela began to pay trial period monthly payments for the “Making Homes Affordable” program. When it was time for Bank of America to grant her the promised modification, they instead mailed her a notification alleging that she failed to make four out of five payments. Her home, unknowing to her, was slated for auction at the Fulton County courthouse during the time the bank claimed to be researching their records for the “missing” payments. The thing is, Pamela Flores never missed a payment, in fact she was never even late, and has all the records to prove it.

Pamela was forced to file Chapter 13 and 7 in order to stop Bank of America from stealing her home. The act of filing has stopped Pamela from being able to recieve a student loan she had formally been approved for in her effort to pursue a masters degree at Emory University. Her ordeal with Bank of America has forever impacted the course of her life. The home she paid over $180k for is now appraised at $38k.

Since she reached out to Occupy Atlanta a few weeks ago, we were able to work with the Rainbow Push Coalition to put off her home auction for one month--but that’s not good enough. Occupy Atlanta and the newly formed Occupy Our Homes - Atlanta will begin a full scale occupation of Pamela’s home until Bank of America makes a deal to keep her in it. Occupy Atlanta and Occupy Our Homes will work with her community to establish a base for defending other homes at risk of foreclosure and eviction. We plan to target private and public institutions that continue to disrespect Vine City residents.

Occupy Our Homes Atlanta is committed to maintaining a 24/7 presence at the home of Pamela Flores until Bank of America makes a deal that keeps her in home. During our time here we also plan to work with the Vine City community to create a hub, at Pamela's home, for eviction/foreclosure defense. We invite folks from surrounding communities who are struggling with housing issues to come down to 245 Griffin Street, Atlanta and work with us to build the communties we can survive and thrive in.