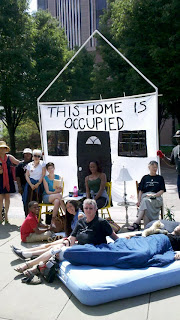 Bank of America has made a habit of kicking folks out of their homes illegally. Since most people have no place else to go, today Atlanta community members decided to move in to the Bank. There was one simple demand. MAKE A DEAL TO KEEP PAMELA FLORES IN HER HOME!!

BoA is attempting to foreclose on Pamela’s home, claiming that she missed payments during the trial period of a loan modification she    received through the “Making Homes Affordable” program. The thing is, Pamela never missed a payment and has the records to prove it.   Instead of investigating her case and admitting their error, the bank is moving forward with plans to foreclose.

BUT WAIT.... THERE’S MORE!
Trying to steal Pamela’s home is hardly Bank of America’s first offense. Their crimes are vast, and their greed is immeasurable. They’ve drained seniors of their retirement and savings by selling crap mortgages disguised as highly rated investments to unions and pension funds. They’ve diverted millions of dollars that would have been spent on building schools and education by scamming local municipalities out of fees and mismanaging their money. They popularized the term “robo-signing”-a practice that involves forging court documents in order to illegally foreclose on properties they had no claim to. Bank of America is also racist. They knowingly pushed African Americans and other minorities into risky sub-prime loans, while giving white non-minorities of the exact same financial status stable prime loans. An overwhelming 40% of their loans have been shown to have income overstated by the lender, trapping people in loans they knew couldn’t be repaid. They implemented systems to charge bogus overdraft fees to their checking account customers, and even take advantage of the unemployed by charging massive fees to people trying to access their benefits. This is all after receiving billions of dollars in tax-payer funded bailouts and debt guarantees from the federal government. Bank of America paid $0 in taxes last year, and even received a $1billion refund-- money they turned around and used to pay out over $35billion in bonuses to their executives. 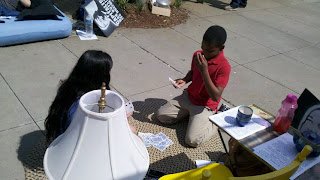 First of all, close your account with Bank of America!! Once you’ve done that, give CEO Brian Moynihan a call. Let him know how you feel about their practices, and that you want him to “make a deal to keep Pamela Flores in her home at 245 Griffin Street in Atlanta!” 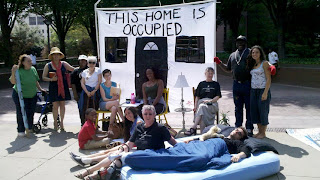 Posted by Atlanta Economic Justice Program/AFSC at 1:22 AM