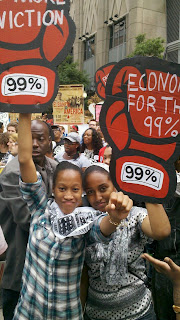 This past Wednesday Bank of America held their annual shareholders meeting at their headquarters in Charlotte NC. People from all over the country came to Charlotte to bring their grievances to the largest bank in the world, a bank that is responsible for knowingly pushing bad loans that have cost millions of people their homes. Homes are the only thing BofA has painted a target one; 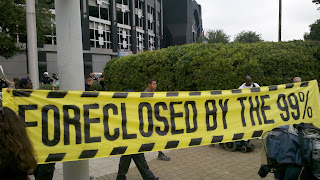 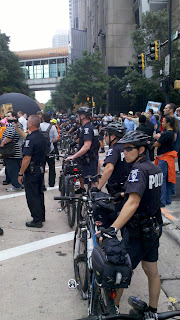 *They’ve drained seniors of their retirement and savings by selling crap mortgages disguised as highly rated investments to unions and pension funds.
*They’ve diverted millions of dollars that would have been spent on building schools and education by scamming local municipalities out of fees and mismanaging their money.

*They popularized the term “robo-signing”-a practice that involves forging court documents in order to illegally foreclose on properties they had no claim to.

*An overwhelming 40% of their loans have been shown to have income overstated by the lender, trapping people in loans they knew couldn’t be repaid.

*They implemented systems to charge bogus overdraft fees to their checking account customers, and even take advantage of the unemployed by charging massive fees to people trying to access their benefits. This is all after receiving billions of dollars in tax-payer funded bailouts and debt guarantees from the federal government.

*Bank of America paid $0 in taxes last year, and even received a $1billion refund-- money they turned around and used to pay out over $35billion in bonuses to their executives. 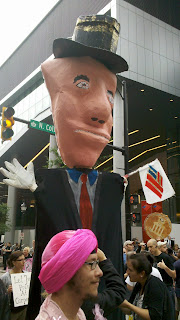 So there's no mystery as to why so many can so far to turn BofA's shareholders meeting into an opportunity to share with the world the many ways in which BofA disrespects our communities. Three separate marches converged at BofA's headquarters just before the scheduled shareholders meeting. Each feeder march focused on a different issue, one on corporate greed, one on housing, and one one the environment(BofA has sunk billions into the coal industry). 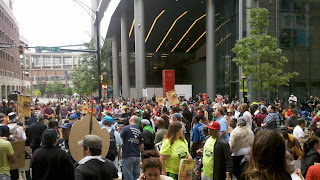 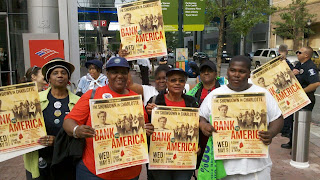 Right as the shareholders meeting began several homeowners being foreclosed on by BofA attempted to enter the meeting and when private security refused to allow them in police where called in. The four were arrested for refusing to leave the area. 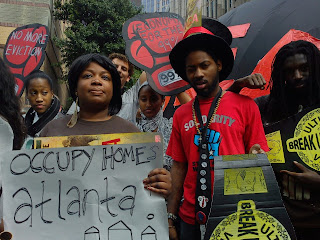 It wasn't only BofA's financial stock that took a hit this week,their moral stock took a dive as the BofA shareholders meeting made over 1,000 media hits, most of which painted BofA in a pretty negative light, which they have certainly earned. 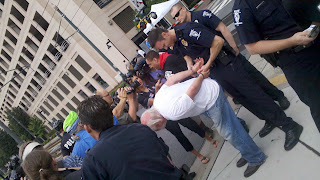