Newton County Resident Moves Back Into Home After Wrongful Eviction 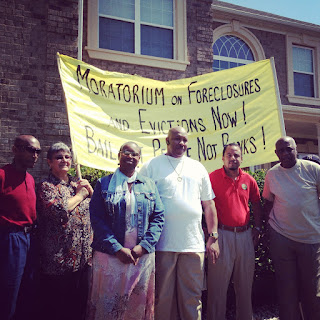 Newton County resident Eddie Jones was illegally evicted on Thursday, May 17th. Instead of just rolling over and letting his house get taken away like so many other Americans, Eddie decided to fight back. Eddie got a few friends together and did something very few have been brave enough to do—he moved back into his home.


This past Saturday, Sheriff’s deputies showed up at Eddie’s home to evict him. After allowing Eddie to show them paperwork that proves his foreclosure--and therefore eviction--is wrongful, the officers decided to leave and give Jones until Monday, May 21st to vacate his home.

Former Congress Woman Cynthia McKinney, who Eddie used to work for as a body guard while she was in office, contacted Occupy Our Homes ATL(OOHA) this past Saturday with a sense of urgency.
OOHA sprung into action and planned a press conference for Monday morning, the same time Eddie's 2nd  eviction was scheduled. As we were mobilizing folks the Sheriff of Newton county was contacted and informed that Eddies case was rife with fraud, and that the community would push back if there was an eviction attempt.


At the press conference, which was also a soft blockade against Eddie's eviction, we were joined by Vison Jones of National Action Network, Cynthia McKinney, Civil Rights leader Joe Beasley, and members of Newton County SCLC. 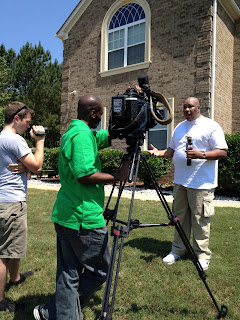 After the Monday morning press conference Newton County Sheriff Ezell Brown agreed to meet with Eddie and put off eviction for an additional two weeks to establish fraud on behalf of the foreclosing entity, which in the case is Fannie Mae


More on Eddie Jones’s fight to save his home.


Mr. Jones suffered from a car wreck in 2008 and missed three payments on his mortgage, which caused him to spiral into foreclosure. He applied for the Making Home Affordable program and was accepted. After making three payments in full and on time Mr. Jones was mysteriously dropped from the program. His home was then transferred over the Internet via MERS from Litton Loan Servicing to Fannie Mae. He has a copy of the MERS transfer of the property to the evicting party, Fannie Mae, which is under a cloud of legal suspicion and may not have standing in Georgia Courts.


Mr. Jones’s home was fraudulently obtained by Fannie Mae through MERS (Mortgage Electronic Registration Systems), which was deemed by Courts throughout the country as not having any ownership interest in any mortgage. He has a case pending before Newton County Court, #2012978-5.