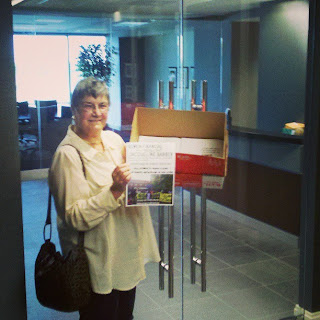 Today tens and thousands of signatures from four different petitions demanding that Ocwen and US bank make a deal that keeps Jacqueline Baber and her family in their home was delivered to Ocwens hard to find office at the 6th floor of the 2002 Summit Boulevard building  in Sandy Springs.

When we got up to the 6th floor, which is all Ocwen, the receptionist would not let us in. We had to call and talk with her through a glass door. We stated that we were there to deliver something to Vice President John Bitti. It was clear that they were afraid to let us in, we assured them that we simply were going to drop off the petitions and be on our way.

Eventually we decided to prop the petitions against the door; Dianne Mathiowetz was kind enough to pose for a picture with the petitions in front of Ocwens main office entrance.

As we were delivering the petition a team of folks were in the lobby passing out these flyers. 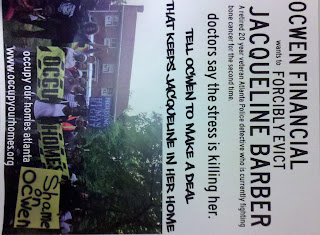 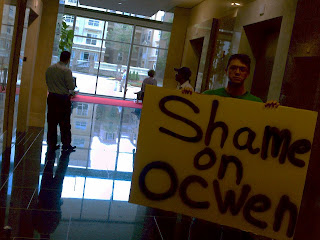 Our goal was to make it clear to Ocwen that we know where they are and we are not afraid to bring the fight to save Jacqueline's home to their front door. We also wanted their neighbors to know the Ocwen is willing to put a 20 year APD veteran and Cancer survivor out on the street at a time that her battle with cancer is not going that well.

The corporate complex the Ocwen's office presides on is totally privately owned, even the streets and sidewalks or not public, so we were confronted with private security pretty quickly, but not fast enough to stop us from delivering our petition and passing out tons of leaflets.
Posted by Atlanta Economic Justice Program/AFSC at 5:20 PM