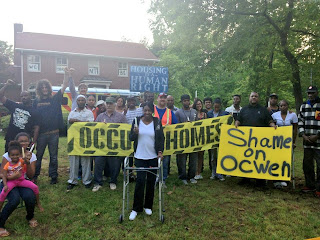 On Monday Jaqueline Barber got a call from Ocwen, a financial institution she's never heard of, informing her that she has two days to vacate her home. She had just gotten out of the hospital after having a procedure done on her back, leaving her walker bound when not bed ridden. The news from Ocwen was terrible news for someone fighting their second bout of multiple myeloma.

Jacqueline Barber found out that her mortgage was transferred from GMAC to Ocwen Financial Services and Ocwen is refusing to honor any of the deals arranged with GMAC over the last 6 months, which included a buyback offer.

Ocwen Financial services is a company notorious for shipping jobs overseas, creating tax havens in the Virgin Islands, and defrauding customers. The executive chairman of Ocwen, William Erbey famously accepted millions of bailout dollars while setting up tax shelters for Ocwen’s Home Loan Servicing in the Cayman Islands to avoid paying any taxes.


The stress of an eviction would not only leave Jacqueline, her daughter, and four grandchildren homeless, it would also accelerate her cancer severely. We believe that moving Jacqueline could literally be a death sentence to a woman who worked hard serving her community her whole life and simply got sick.
Over 50,000 people have signed various online petitions for Jacqueline Barber and there have been solidarity actions all over the country. Click here to add you name.

American Friends Service Committee and Occupy Our Homes Atlanta have been working with Jacqueline since October of 2012. GMAC had agreed to allow Jacqueline to buy back her home at market value. Jacqueline agreed to pay $1800 into the registry of the court until she could get financing, a payment she has made early every month.

Today around 30 people joined Jacqueline in front of her home for a candlelight vigil. It was made clear that the community will simply not allow Jacqueline's life to be at risk by Ocwen. Her life is more important than Ocwen's greed.