One Step Close To A People's Bailout 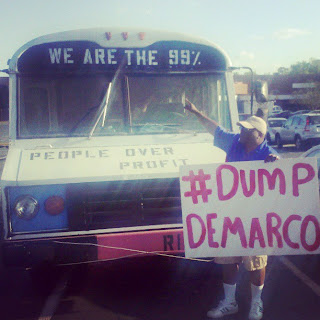 Occupy Our Homes Atlanta and New Bottom Line’s #DumpDeMarco campaign helped drive Ed DeMarco, a virtually unknown appointee from the Bush administration, into being known as the “the biggest roadblock to our country’s economic recovery.”

During his tenure, DeMarco blocked needed and sound economic policies such as principal reduction, which in turn helped to drive millions of homeowners into unneeded debt and foreclosure while holding down our country’s economic progress.

“This is a good day for homeowners and families across the state of Georgia and a big step in the right direction for our economy,” said Mark Harris with Occupy Our Homes Atlanta. “We now encourage Congressman Watt to implement common-sense policies like principal reduction to bring relief to tens of millions of homeowners like me and to jump start the economic progress our country needs.”

American Friends Service Committe and Occupy Our Homes Atlanta joined with New Bottom Line on a 16-month campaign that included: