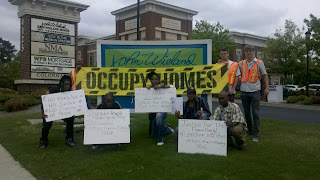 Today the Figaro family led a letter delegation and picket outside the headquarters for John Wieland Homes, the contractor that built Mike and Patrice's home without proper permits and caused them years of suffering.

Before the street protest outside the office Mike and his sons were joined by ten of us as we walked inside the office and asked to meet with whoever's in charge. During our meeting it was clear that John Wieland's staff was unwilling to take Mike's case seriously.

After the meeting we stood outside the office and passed out leaflets to folks driving by and folks coming in and out of John Wielands office for business.

Here is the letter we delivered: 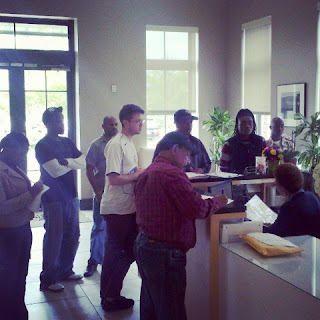 Our names are Mike and Patrice Figaro. In 2006 we paid in full for you to build us a home in Fulton County. After moving into our home we discovered that John Wieland Homes had cut corners getting permits and building our home. There was never a permit approved for the 220V line into the house, the signature on the certificate to occupy was forged, and a sinkhole grew in our yard. As a result of your negligence and lack of accountability, we went through multiple water heaters and electronic appliances. As we tried to have you repair the problems you caused, our home was condemned by nearly every institution aside from the Fulton County government. Because there was no electrical permit, people refused to make repairs. Now we have lost the house to foreclosure after having to take out a line of equity to survive all the pitfalls in the house you built us.

We demand justice. We demand that you fix the problems in the house you fraudulently built, and compensate us for our pain and suffering.

We expect a response by this Friday at 5pm.