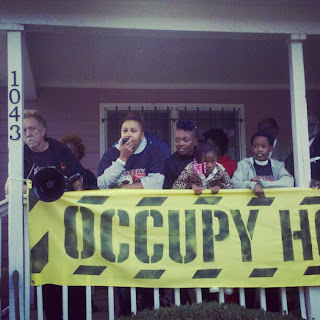 One year ago today the Occupy Our Homes movement launched, signaling a fundamental shift in how homeowners responded to banks trying to take their homes.


As the new housing justice movement enters it's second year, with scores of homes saved and dozens of ongoing fights happening as you read this, Occupy Our Homes is celebrating the courage of every individual and family in housing crisis who has stood up and told the banks, “I’m not leaving.” 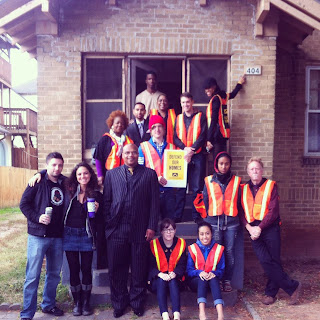 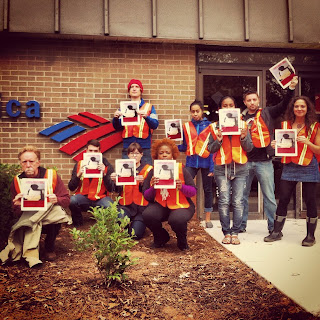 American Friends Service Committee has been there every step of the way, exploring ways to provide resources and capacity to help Occupy Our Homes Atlanta build real power in some of the hardest hit communities.

This year Occupy Our Homes Atlanta recalled the actions of last year and pushed the envelope with bold creative actions.
The day started with a victory press conference we will be holding a press conference to announce the victory of the Pittman family. One year after they started their fight which brought together hundreds across the city, shut down multiple Chase Bank branches on multiple occasions, and included numerous acts of civil disobedience, the Pittman's have now wrested control of their home from Chase, just in time for the holidays. They faced eviction as recently as two weeks ago, now the home will be safe for generations to come.

Directly after the press conference a group of us piled into a bus and paid a visist to Bank of America for a flash demonstration in solidarity with JoSelf Freeman, who's facing eviction.

Later in the day, people will gathered in Pittman Park to march to a vacant bank owned home and liberate it. A same sex couple, Michelene Meusa and Reneka Wheeler, that has spent months bouncing between shelters with their two children will be enforcing their moral right to housing by moving into and repairing a vacant one in a neighborhood where more homes sit empty than occupied. This is an act of civil disobedience that has support from surrounding residents, churches, and community leaders. 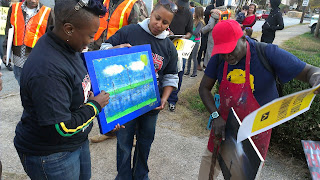 Banks and other financial institutions have wrongly foreclosed and evicted millions and millions of people from their homes after crashing our economy, neighborhoods in South Atlanta have been the hardest hit. For every homeless person in Atlanta there are seven empty homes, we believe that's a crime.

Today on this December 6th, housing justice actions have taken place around the country as part of Occupy Our Homes' second anniversary day of action. From Minneapolis to Atlanta, Baltimore to Los Angeles, Denver to San Francisco and in cities and towns large and small, communities are committing to reclaiming our homes and our futures from the grips of Wall Street greed. People around the country are standing up and saying:

“I’m not leaving because this is my home, not the bank’s.”

“I’m not leaving because Wall Street broke the economy, not me.”

“I’m not leaving because the bank can’t prove they have a right to foreclose.”

“I’m not leaving because housing is a human right.”

Posted by Atlanta Economic Justice Program/AFSC at 1:37 AM