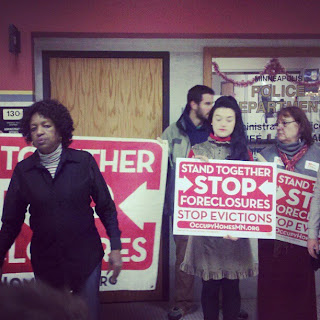 As the housing crisis continues to put more and more people on the street we've seen a wave of brave housing justice organizers around the country that have demanded that banks be held accountable for their illegal mass felony fraud.

People are standing up to the financial institutions that have been using our homes as ATM's. Housing justice groups in Atlanta, DC, Minneapolis, LA, Oakland, Colorado, Portland, Nashville, St Louis, and other cities have stood with residents who are resisting foreclosures, evictions, and taking back bank owned properties.

Banks are only able to enforce these evictions by using local law enforcement officers on the tax payers dime. It's a sad irony that these banks have milked our economy for 16 trillion dollars and now we're forced to pick up the tab for the eviction process.

Today 20 Atlanta Police Department Detective Jacqueline Barber stood in solidarity with the 36 Occupy Homes MN activists who were arrested for peacefully resisting the eviction of the Cruz family last may. Who did the arresting? It was the Minneapolis police department. How much did the bank pay for this service? Zero.

Many of the Occupy Homes MN activists were charged with inciting a riot, which is considered a violent crime in MN. Off the record many of the officers who were given orders to enforce the evictions would prefer not to carry out the order, but forced between carrying out the order and losing their jobs is a tough decision.

It's time to start prioritizing the needs of our neighborhoods over the needs of the very financial institutes that continue to disrespect our communities and hold our economy hostage. Our homes are ATM's.

A community is stronger and healthier when it is controlled by those that live in it, not far removed entities that only seek to build their fortune on the shattered dreams of others.

The brave folks around the country that are putting their bodies on the line for their neighbors are heroes  and should not be persecuted.
Posted by Atlanta Economic Justice Program/AFSC at 1:32 AM