This week I've been in court everyday from 9am-7pm every day along with over 80 other defendants in the Occupy Atlanta trials. It looks like some of us will be in court through Friday evening. 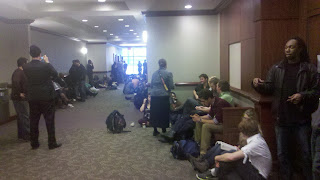 It's been eventful. On day one, during our first lunch break, about 50 of us marched to the mayors office demanding that he answer the subpoena to appear in court, which he ended up refusing to. Mayor Reed instead sent his lawyer and had the subpoena quashed on the grounds that his role in the charges against us was irrelevant/The irony is that Reed clearly had everything to do with the charges, and that he took a very hands on  approach with occupy Atlanta. 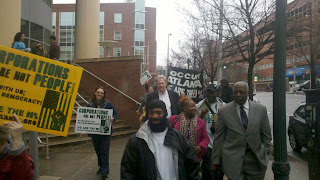 I personally, along with Joe Beasley, was pulled into Mayor Reed's mobile command unit during the part occupation where it was made clear the Mayor Reed was not as concerned with the issues that brought on park occupations all over the country(wealth inequity, corporate greed) as he was his image. Mayor Reed wanted the visible demonstration to go away. 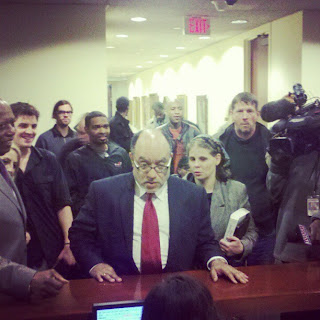 Whether it's evicting a movement that aims to challenge historic wealth inequity, or pushing our cities homeless into the darkest corners of the city, Mayor Reed seems bent on making the symptoms of poverty invisible instead of dealing with them.

On day one we also had a number of defendants make plea bargains for a variety of life circumstances. All the folks that plead out were basically let of with community service and almost no one got a fine.

Today around a dozen folks were dismissed for lack of evidence. It seems that the APD failed to document any of the arrests correctly, which can likely lead to every arrest being dismissed. We'll see. Looks like this trial will go on through Friday.

American Friends Service Committee was proud to provide headquarter space for Occupy Atlanta during the park occupation. We also provided a series of nonviolence workshops for the movement.
Posted by Atlanta Economic Justice Program/AFSC at 5:27 PM