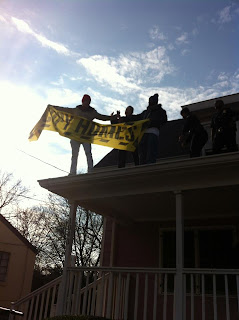 Yesterday M&T bank representatives, police and a local organization raided a home in the Pittsburgh area of Atlanta. On December 6, Occupy Our Homes Atlanta and members of the Pittsburgh community decided to give the vacant house to a family that needed a place to call home. OOHA Immediately contacted the bank to ask them to donate the house to a non-profit organization for a tax write-off. Calls and emails to the bank were never returned. 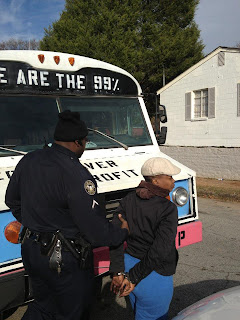 Atlanta, which has been shredded by the foreclosure epidemic, is now home to a growing population of displaced citizens. Instead of putting some of these homes into use, their actions showed that M & T Bank, along with the Pittsburgh Community Improvement Association (PCIA), want to keep these homes empty. M&T Bank, in Buffalo, New York, spent the money to fly down a bank representative. Accompanied by countless APD squad cars, the fire department, and the PCIA., he arrived at the house with no notice, and issued a criminal trespass warning. As volunteers loaded the family’s valuables into the OOHA bus, Renika, a resident of the house, was arrested for refusing to leave. Her partner, Michelene, and two members of OOHA were later arrested for criminal trespass. Renika and Michelene’s two children were picked up by an assigned guardian. 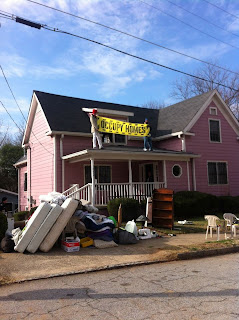 Occupy Our Homes Atlanta has set out to address issues within the housing crisis that led to massive foreclosures and plunging home values that stripped communities of homes and wealth. Pittsburgh is among thousands of neighborhoods that have been the preying grounds for banks, investors and even community organizations to distribute wealth and capital between themselves, while ignoring the needs of those that have true investment in the community. There is no reason for the City of Atlanta to loan police officers to M&T Bank for forced evictions when there are 7 vacant homes for every shelterless person. 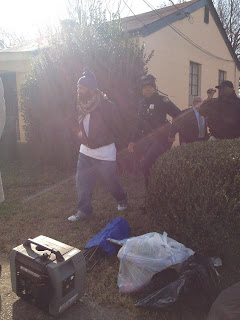 One cruel irony is that the cost of the plane tickets to fly the M&T executives, the overwhelming police presence, the private contractors, and the PCIA CEO, was likely more than enough to buy the house outright.
It's truly sad the PCIA, which presents it's self as an organization that lifts up the community, clearly worked closely with the bank and law enforcement to execute the eviction. The PCIA CEO who came hand in hand into Renika and Michelene's home came off as insincere being that he waited till a media spotlight was on the house before any assistance was offered to the family.
What happened yesterday at 1043 Windsor is more evidence that our city and country's economic priorities have driven over a moral cliff. When an out of state Bank's right to toss out a family and board up a house commands thousands of dollars of city and community resources and the overwhelming number of displaced people on Atlanta's streets goes unaddressed it's safe to say we're not in a crisis of resources; rather a crisis of priority. 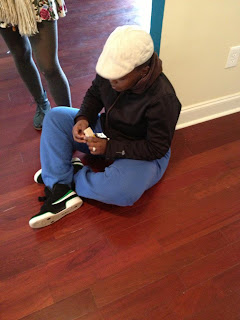 The American Friends Service Committee believes housing is a human right, and that there are more then enough resources to ensure a roof over everyone's head. We're not broke, in fact there's never been so many resources in the world.

There's a better way, and it starts with looking at our local and national budgets not as a random shopping list, but a list of moral priorities. Do we spend more on systems of violence and oppression, or should we invest more in housing, education, and healthcare? Do we provide more resources to protect the banks, or do we invest energy into protecting struggling human being with beating hearts? 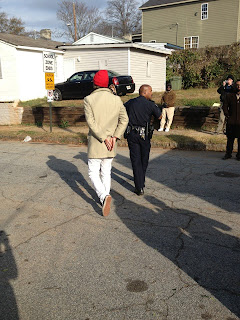 That better way is worth fighting for, it's worth making personal sacrifice. Yesterday I decided to take off my AFSC hat and join with others in an act of civil disobedience and refuse to leave the home. That decision landing me with a 14 hour shift at the Fulton County jail(something none of the bankers who crashed our economy have experienced) and a criminal trespass charge. It's a decision that was personal, it's something I'm deeply proud of, and It's something I will gladly do again.