Questioning War From the Inside 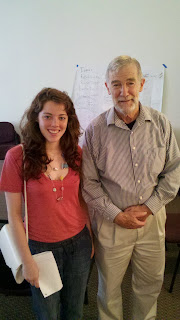 A former senior CIA analyst and intelligence briefer for Presidents Reagan and H.W. Bush turned political activist, Ray McGovern has used his ethos in politics and his experience with war to validate his outspoken opinions against the war in Afghanistan.

McGovern graduated from Fordham University where he majored in Russian and proceeded to obtain a position in the CIA, where he worked as an intelligence briefer and analyst for 27 years.

“So I went back and I signed up for Russian [as my major]. Within a couple months the first man in space; another couple months there was a crisis in Berlin with Russian tanks and German tanks, then there’s the Bay of Pigs thing. So there became a real need for translators or people who knew about the Soviet Union and so it was a kind of natural step to go into the Army first, where I served two years as an officer, and then go into the CIA in the analysis part.”

Since his retirement from the CIA, McGovern has repeatedly protested US involvement in both the war in Iraq during the W. Bush administration and the war in Afghanistan during the Obama administration. McGovern has challenged the sincerity of several authorities including former Secretary of Defense Donald Rumsfeld when he quoted Rumsfeld as saying that he knew where the Weapons of Mass Destruction were after it had been confirmed that none existed. In addition, he was arrested for disorderly conduct when he stood silently in protest during a speech made by Secretary of State Hillary Clinton.

McGovern’s strong thoughts against the wars are influenced by his experiences with the War in Vietnam and the Cold War.

“Many of the officers that I finished officer infantry school with at Ft. Benning were killed in Vietnam; many of my classmates at Fordham ROTC were killed in Vietnam and when you think of the immense nature of, not only the 50,000 names on the memorial in Washington, but of the 3 million Vietnamese [killed]. So, what kind of people are we that will acquiesce in the killing of 3 million Vietnamese? That soured me on these stupid wars. And then of course skipping all the way to Iraq, we could see, before the war, that the evidence for Weapons of Mass Destruction or ties between Iraq and Al-Qaeda [was nonexistent.]”

“I don’t think there’s anyone that thinks we would have attacked Iraq if their main export was cabbages, so I think that’s pretty clear. I is for Israel, and the reason is that the people who were planning and executing this invasion of Iraq were people so-called Neo-Conservatives, and their big problem is that they have difficulty distinguishing between what they see as the strategic interests of Israel on the one hand, and the strategic interests of the United States of America on the other. Israel wanted us to be involved big time in Iraq; they thought that it would make things more safe for them, which turned out to be just the opposite. The L is for logistics, the strategic military bases that the people think are needed to protect our interests there for the oil and for Israel.”

McGovern has encouraged opposition to the war in Afghanistan, expressing the need for taking action against it.

“Writing letters, writing articles and speaking are good things to do, but I’ve come to the point where I’ve concluded that that’s not enough, that I have to put my body into it, that we need to indulge or resort to nonviolent civil disobedience or civil direct action. We should care. And young people, I think, are sold short; I think people just kind of write them off and say, ‘well this time [unlike in Vietnam] they don’t have any vulnerabilities so they don’t care.’ I think they do care.”