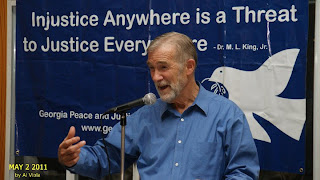 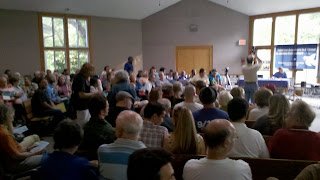 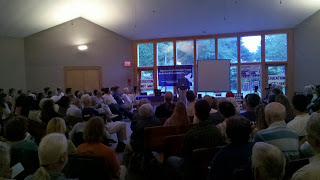 For months the Georgia Peace and Justice Coalition has been organizing for a multiple day visit from 27 year CIA veteran turned political activist Ray Mcgovern. His visit has opened up dozens of opportunities to create local discussions on US foreign policy during a week that has seen the war on terror back in the headlines.

In addition to multiple interviews and speaking engagements Ray McGovern spoke at the Atlanta Friends Meeting House last night to the largest crowd(about 300) I've ever seen there. We literally ran out of chairs. The topic was how to stop endless war in Iraq, Afghanistan, Libya and Beyond.

Ray touched on many other topics including the troubling shift in the culture of the CIA from an organization that collected data that was designed to help shape foreign policy to an organization that collected data in an effort to justify foreign policy. Of course there was much talk of the recent murder of Osama Bin Laden. One member of the audience asked Mr. McGovern if he thought that Osama Bin Laden had actually just been murdered or if it was a hoax.

Mr. McGovern did say that he believed the reports to be accurate but that he was troubled that there wasn't much of an attempt to capture him. He went on to say, "you would think that if the US really wanted intelligence on Al Queda then they wouldn't so quickly kill the one man who has more information than anyone else". Mr. McGovern went on to insinuate that he believes that the US didn't want to capture Osama Bin Laden alive because his testimony would be to damaging to the US.

Mr. McGovern will be in town for the next few days and I'm excited to report that he has agreed to do several interviews with high school and college students for school news papers that we set up. We will be publishing both student articles on this blog as well so look forward to those!