How Do We Make Sure HB87 Fails? 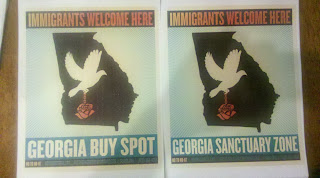 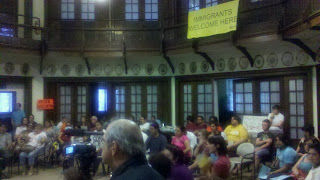 Today Governor Deal signed HB87 and effectively ushered in a new era in Georgia history. We now live in what some are calling the Juan Crow era, an era that we all must work to ensure is brief.
As news of HB87's signing spread folks started heading to capitol to express their outrage at Governor Deal's seemingly inevitable action. Knowing the Governor was politically committed to signing the bill did not soften the emotional impact. To be frank, today has been a very tough day for countless people.
Folks also came out to a town hall meeting held at Trinity United Methodist Church to discuss the impact of HB87. Groups shared resistance actions that they have been organizing and further strategized on effective next steps we all can take in the effort to make sure HB87 fails.
Throughout the course of the town hall meeting it became apparent that HB87 will be defeated. There were just too many committed folks in the room, too many communities represented, too many dynamic ideas put out and too many organizations lining up to support resistance to this bill. It's clearly a question of when and how, not if.
Some of the projects presented during the meeting included:
A boycott of Georgia. Already calls have gone out to avoid traveling to our state of hate. It is urged to no longer plan vacations to Georgia, have your conferences booked elsewhere, skip Georgia if you're booking a music/cultural tour, and make it known why you are boycotting our state.
Georgia Undocumented Youth Alliance is working on creating space for youth in the movement to defeat HB87. Here at AFSC we also hope to raise the voices of migrant youth through our Migrant Youth Voice project. We hope to launch a new website in the next month where we will be publishing a series of short films documenting the lives and struggles of undocumented youth in georgia, in edition we'll also be hosting a number of film screening across the state in the fall.
Southerners On New Ground and the Georgia Latino Alliance on Human Rights (GLAHR) will be leading an effort to organize businesses and sanctuaries to become hate free zones. Houses of worship and places of business that commit to non compliance of HB87 will be certified "hate free" zones where immigrants and human rights supporters are welcome to shop or worship. Contact Southerners on New Ground or the Georgia Latino Alliance on Human Rights if you're down to help with this ambitious effort. We all shop, and many of us are active in a church, so that's where we can start!
GLAHR has also organized an action for women in the defense of immigrant families. Women from all over Georgia will come together to demand a stop to the separation and persecution of their families and to put a stop to 287g and HB87. Wearing white, with their children by their side, women and those in solidarity opposing this legislation will gather at Centennial Park on May 22, 2011 at 10am.
Finally I just want to say that in my personal experience, sometimes failure can be the foundation by which success is built upon. I mention that just to highlight the opportunity that has been presented by HB87's signing today. The chance to build and strengthen communities, the thousands of people that will experience a life changing political awakening as a result of Governor Deals pen stroke today is inconceivable. It is on the foundation of HB87's failure that we can build something new, something different.
Tim Franzen
American Friends Service Committee
Posted by Atlanta Economic Justice Program/AFSC at 9:54 PM