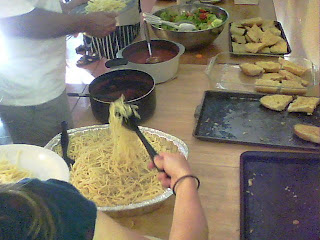 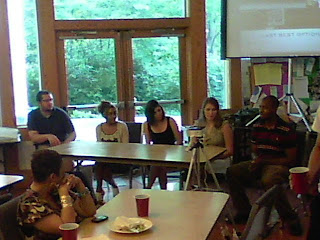 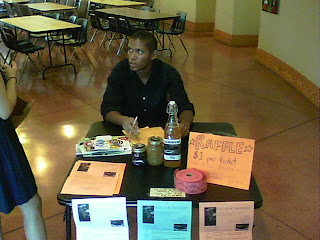 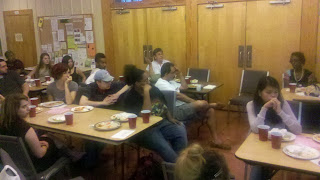 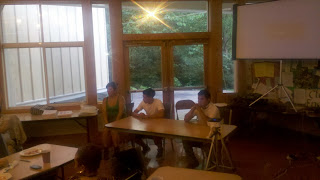 This past Sunday Student Career Alternatives Program(SCAP), a project of AFSC, hosted an event called "Food For Thought".

SCAP organizers spent all day cooking a delicious three course meal for attendees. The event was a fundraiser for SCAP's scholarship fund, and it was an opportunity to create important conversations about some of the issues SCAP focuses on.

After everyone loaded up on food we screened two short films, the first one was, "Last Best Option" which was produced by several really talented Georgia State Students. The film basically chronicled some of the work the SCAP does in Atlanta. We were really lucky to have all the film makers( Kristy Breneman, Kristen Woolford, Victoria Temple, and T.J. Hicks) present along with one of the youth featured in the film(Aisha Davis) for a Q&A after the screening. We all feel that, "Last Best Option" is a really great snap shot into what SCAP stands for, and more importantly what we actually do. Sometimes it's difficult to adequately give the skinny on how SCAP works, so it's really amazing to have this resource to share with folks in the future.

The second short film entitled, "Migrant Youth Voices" is on in a series of films designed to raise the voices of undocumented youth in Georgia. The short that was shown Sunday evening was a compilation of several interviews. The audience was treated to a Q&A with both of the courageous youth chronicled in the film. I can honestly say that there were few dry eyes after the short film was shown. I can't explain how truly inspiring it's been working everyone associated. Migrant Youth Voices is part of a national AFSC effort, here in Atlanta we've been watching what Oakland's been putting out with excitement.

We're really excited at the prospect of showing both of these films around the state or Georgia, feel free to contact me in you would like to set up a film screening at your school, church, community center, ect.

Big thanks to everyone that came out Sunday! We raised a lot of awareness and over $4oo.oo for SCAP's scholarship fund!