Occupy Our Homes Atlanta  and American Friends Service Committee showed up unscheduled at the law firm of McCalla Raymer today to present them with the prestigious Family Displacement Award! 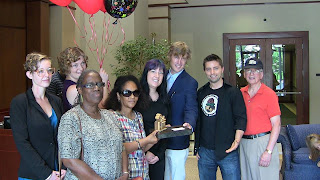 McCalla Raymer has been instrumental in assisting banks in their effort to steal wealth from hard working Georgia residents. McCallaRaymer has excelled at putting people out of their homes and into the street.

Today we congratulated McCalla Raymer for going the extra mile to swiftly remove  people from their homes so that banks can claim massive inventories of vacant homes, collect insurance, and then sell homes to private equity firms at record rates.

McCalla Raymer also played a key role in the robo-signing scandal. In fact many fraudulent robo-signed signatures were signed by McCalla Raymer personnel.  Robo signing may not have been possible without the tenacity of McCalla Raymer.

Several homeowners with first-hand experience with MacCalla Raymer's zeal for home theft were on hand to present the prestigious award, including Toni Furman who was wrongly foreclosed on and evicted May 7th of this year.

With the help of Occupy Our Homes Atlanta and her community,Toni Furman reclaimed her home and has been living in it since June 10th in defiance of the eviction. Toni is excited to be a part of the award ceremony stating, “McCalla Raymer's total disregard for my dignity gave me the exciting opportunity to experience being totally homeless.”

Here at Occupy Our Homes Atlanta we believe in celebrating other’s hard work and determination. Few law firms have worked harder to ruin lives than McCalla Raymer has, and they certainly have profited greatly as a result! Congrats! Being number #1 at anything is no small feat.
Posted by Atlanta Economic Justice Program/AFSC at 5:29 PM