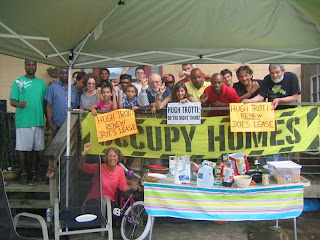 Jaye Crawford lives in the Warehouse Lofts on rogers street in the Kirkwood community. She's rented there for close to 15 years and made thousands of dollars in renovations. It's become a living space for Jaye and her young daughter, it's also become the space Jaye runs her personal fitness training business out of.

The trouble began a year ago when new neighbors moved in with a barking dog. Unfortunately the poor dog would bark all night making it impossible for Jaye and her daughter to sleep. Eventually, after speaking with the neighbor several times, Jaye made a noise complaint. Despite the fact that the neighbors were fined for their noise violation, the barking continued. Jaye decided to go to the property manager, Hugh Trotti, with the issue.

Instead of working with Jaye, Hugh Trotti informed the longtime resident that her lease would not be renewed and that she would need to be out by the end of June. This was devastating news to Jaye as her home is not only an integral part of her work it's also in her daughters charter school district. 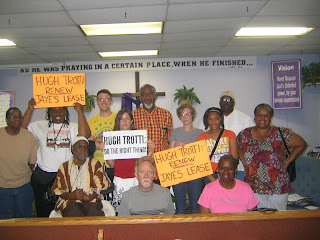 Rather then packing up and moving Jaye decided to fight back with the help of Occupy Our Homes Atlanta and American Friends Service Committee. Jaye has worked with the community to organize cookouts, candlelight vigils in front of Hugh Trotti's home, and published an online petition to pressure Hugh Trotti to do the right thing.

A tenant should never be displace arbitrarily from a home they have been devoted to for years. One of the values that drives AFSC's work is the belief in human dignity, that no human being should be so easily discarded.

We encourage everyone to make the following calls/emails and encourage Hugh Trotti not to displace this hard working single mother. 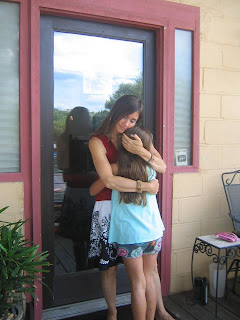 Here is a sample script you can use:
“Hi, my name is ___________ and I am calling on behalf of Jaye Crawford and her daughter who live in the Warehouse Lofts, unit 203. I’m calling to ask you to do the right thing and renew Jaye’s lease. If her lease isn’t renewed, she’ll lose her business, which is her livelihood. She and her daughter do not deserve to have their life turned upside down. And unsuspecting, new tenants don’t deserve to be subjected to an unaddressed dog barking problem. Please renew her lease so she can keep her home and livelihood. She is a timely and hardworking tenant, and deserves to remain in her home. Thank you for your time.”

Hugh Trotti has refused to renew her lease for a few possible reasons:

1) She has made thousands of dollars in repairs and improvements to her loft and Mr. Trotti wants to reap the benefits.

2). She recently took a neighbor to court (and WON) over their incessantly barking dog, which keeps Jaye and her daughter up at night. Mr. Trotti has refused to address the constant noise violations, and doesn’t want any tenants that raise issues with the way he runs the Warehouse Lofts.

Neither of these are reasons to kick a family out of their stable home.