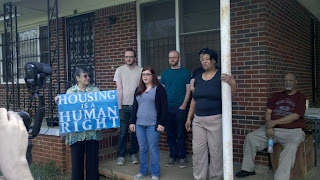 Around 8:30 AM on Friday August 5th 2012 Sherrye Calhoun woke to Dekalb County Sheriff’s Deputies knocking on her door. They demanded that she leave her home immediately. Over the course of the morning Sheriff Thomas Brown’s deputies supervised her eviction. They had no dispossessory warrant or writ of possession filed with the court. She has lived in the home for 30 years.

Within hours, Ms. Calhoun’s possessions were moved back into her house with the help of Edgewood residents and supporters. Sherrye Calhoun decided that she wouldn't leave her home regardless of the risk.


Sherrye’s neighbors and community groups including SWARM and Occupy Our Homes Atlanta, and American Friends Service Committee got involved, organizing eviction free cookouts, neighborhood canvassing, marches, call-in days, and direct action. As of last week JP Morgan Chase has decided to turn over the deed to Sherrye Calhoun. Sherrye will no longer have to fear a knock on the door from Sheriff Brown’s officers.All over the country housing justice organizations have been working side by side with struggling residents taking bold creative action to address the cruel irony of a growing homeless population alongside an even larger number of vacant homes. Sherrye Calhoun's story is rare and perhaps precedent setting victory in the South

With a growing homeless population all over the country, and millions of "zombie foreclosures"  the idea of folks building community support and simply marching to a vacant home that was once theirs, pulling the boards off and moving in publicly seems in the realm of possibility. If bold actions were taken in communities all over the country banks would be overwhelmed.

What we need now is to match the banks unprecedented greed and corruption with historic creative people power.
Posted by Atlanta Economic Justice Program/AFSC at 1:36 PM