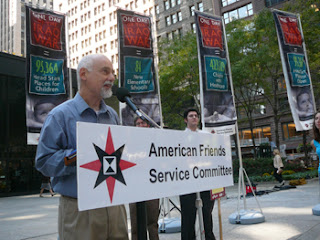 Please join us in holding Michael's family in the Light.

On a personal note, Michael was a source of inspiration for me. I'll never forget a presentation Michael gave on the War on terror and the human costs abroad and right here in our communities. That one talk changed the lens through which I see local consequences to war and my organizing focus and approach in Atlanta. If I could say something to Michael right now I'd say, "The far and wide impact you've left in your wake in not measurable. Thank you for helping me be a better organizer Michael. You are loved and will be missed by many."

The last time I saw Michael was at an AFSC Wage Peace gathering in Chicago in December of last year. He continued to frame the cost of the military budget as a robbery of desperately needed resources from our struggling communities. Here's a picture of that gathering: 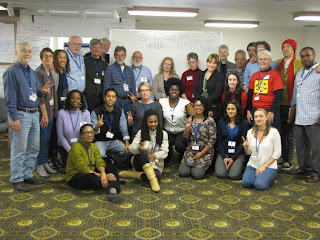 Michael McConnell, longtime regional director of AFSC's programs in the Midwest, passed away on Sunday, April 7, after a long struggle with cancer.
The visitation is Thursday, April 11, from 4 to 9 p.m. at John E. Maloney Funeral Home, 1359 W. Devon Ave. in Chicago. The memorial service is Friday, April 12, at 4 p.m., at Wellington Avenue United Church of Christ, 619 W. Wellington Ave.
Michael became Regional Director for AFSC's Great Lakes Region in January 1990, and in June 2012 for the new Midwest region.
Michael became a passionate and creative leader in AFSC and with many partners for building our programs to challenge war and preparations for war, while lifting up alternatives. He was one of our chief thinkers and strategists for work on ending war and violent response to conflict, from developing the “Eyes Wide Open” campaign to our current F-35 campaign on military spending. He supported creative and effective programs dealing with healing justice, immigrant rights, peace, and economic justice across the region and the whole of AFSC, nurturing leadership qualities among staff and championing opportunities for young people to engage in AFSC work and gain knowledge, skills and passion for peace with justice. Michael’s legacy is deep and enduring.
Read more in this April 9 obituary from WBEZ Chicago:
8http://www.wbez.org/news/prominent-chicago-peace-activist-michael-mcconnell-dies-cancer-106558
Posted by Atlanta Economic Justice Program/AFSC at 2:33 PM