A Report From The Occupation Of AT&T 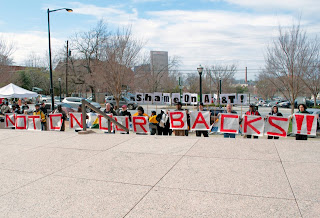 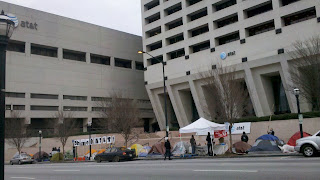 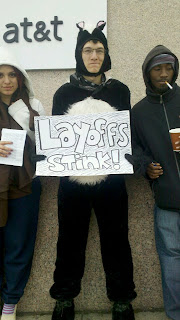 Last night I shot some footage of folks talking about why they Occupy AT&T:


Today marked nine days since the Occupation of AT&T's Atlanta HQ began,and everything seems to be growing. From public awareness to the number of people camping, things are definately moving.

They morning kicked off with email blasts around the country asking folks to call/email AT&T and tell them to rescind all layoffs. I know that by 1pm Michael Mathews phone, AT&t's VP of labor relations,had taken so many calls is was simply ringing endlessly.

Our plan for the day was to serve breakfast to workers who were showing up for a really tough meeting. There where meeting scheduled at 9:30am and 1:30pm for workers to recieve their layoff packages. At noon we held a press conference with some of the workers who felt safe enough to give interviews. After the press conference we decided to take AT&t'S courtyard to send a clear message, "Not On Our Backs!".

America's working class has been on bended knee for too long. It is time to draw a line in the sand and straighten out our spines. Atlanta, and the rest of the country for that matter, can't afford layoffs, especially from companies that are pulling unthinkanle profits year to year, corporations that insist on compensating CEO'S to the tune of 27 million at the cost of 740 working class jobs. This practice of discarding workers like trash is unaccptable.

Together we can turn the corner and regulate corporate greed. AT&T is an important forst step for us in Atlanta. Help us send a message to corportate Atlanta that we can't afford one more layoff.