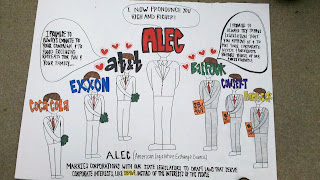 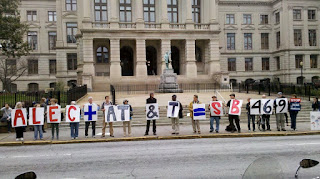 Today marked the first day of public action against Senate Bill 469. A group of folks from Occupy Atlanta among other groups gathered at the capitol and again later in front AT&T to oppose the bill and shine light on it's shadowy or gins.

ALEC basically brings lawmakers and corporations together to draft model legislation. Law makers pay $50. every two years to be members of ALEC while corporations pay $50,000 a year and additional large sums of money to be a part of one of the nine ALEC task forces. ALEC claims to be nonpartisan but the fact is that it's also funded by several right wing think tanks.


Law makers are given scholarships to attend luxery conferences with their families. At these conferences corporations vote on model legislation and refine the language of potencial policies that elected officials associated with ALEC are charged with the task of introducing. ALEC writted legislation is passed one out of five times.

The lastest piece of ALEC wriiten legislation , SB 469, would make it a crime to organize sit ins, fine individuals for picketing($1,000 per day), and fine organizations who support a picket($10,000 per day).

ALEC was also responsible for the anti-immigration bills that swept the nation last year, HB 87 in Georgia. Why would ALEC be interested in anti-immigration bills? The Corrections Corporation of America(CCA) is a ALEC member. CCA stands to profit billions of dollars to inprison undocumanted Americans if bills like HB 87 continue to sweep the nation. To CCA undocumented Americans make more profit locked up in a cell then they do working, and US tax payers pick up the tab. At every turn it seems ALEC represents the worst kind of wealth consolidation in this country.


We encourage folks to call the sponsors of ALEC legislation on let them know that we will no longer allow them to put the needs of wealthiest corporations over the needs of the 99% of us that create their wealth.