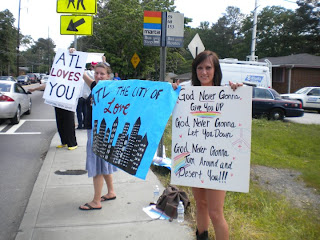 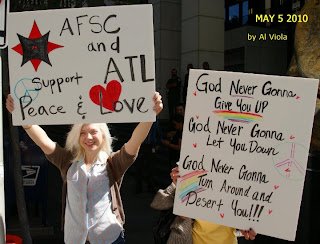 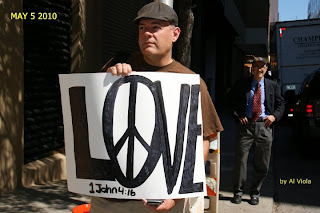 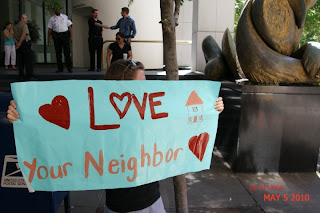 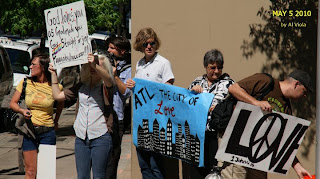 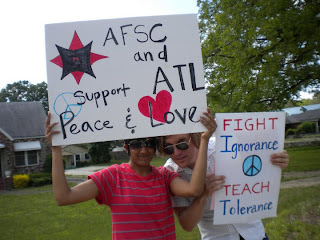 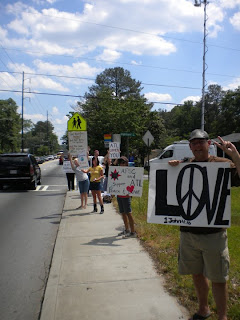 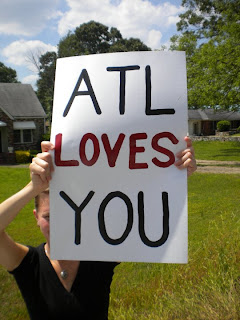 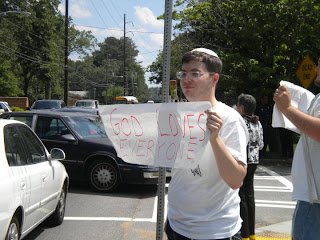 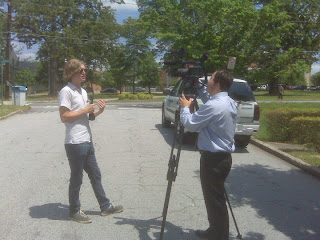 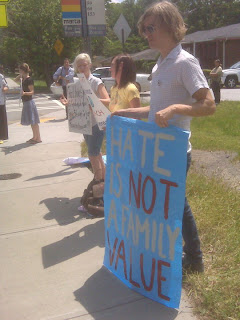 This morning some of us were still unsure whether or not the infamous Westboro Baptist Church would actually show up in Atlanta. We had heard that they often promote visits that they end up not turning out for. I honestly had sort of hoped that they wouldn't show. A small group of us gathered at AFSC this morning. Before we left there was a brief discussion about how we would react to when we actually came face to face with signs that said, "God Hates Fags". Though there had been extensive discussion on the dynamics of the Westboro cult, and there was a general conscientious that many in the group were actually victims, there was still a knowledge amongst our group that some might have difficulty containing emotional responses to the hateful messages.

At 9:45am we received confirmation that WBC was on their way to their first target in Atlanta, the Marriott. They were planning to protest a Jewish Convention. When we showed up, they were there. We weren't the only counter demonstrators. There we two young Jewish men from a group called PunkTorah and several Veterans. As we stood there holding our love promoting signs and passing out leaflets I couldn't help but feel baffled at how this group could have such conviction about their hate. It was clear that this was a highly disciplined group that goes to great efforts to get their message out, which is basically, "God hates us all and we're going to hell".

The Leaflets we passed out to folks gave a brief explanation of what the WBC is, but more importantly it talked about confronting hate with love. The leaflet asked those that were upset with the WBC(which was pretty much everyone) to contribute to one of three organizations that are doing important work in Atlanta:

Hopefully by this weekend we'll have an idea about how much money the WBC visit ended up raising for these important organizations.

We ended up following the WBC to Douglas High School. The WBC had planned to picket the school right as class let out for the day. When we showed up it was clear that the faculty had gone to very far lengths to limit the WBC's access to their students, it was rather impressive actually.

We were all glad that we had devoted the day to counter the WBC's presence at Douglas. The faces on parents and community members as they passed the WBC was one of shock. There were multiple folks that did several drive byes. Parents and folks in the neighborhood really appreciated our presence.

So tomorrow is the big day and we're all looking forward to celebrating love and diversity with Grady students and others at Piedmont Park 3-4:30pm. You're invited!