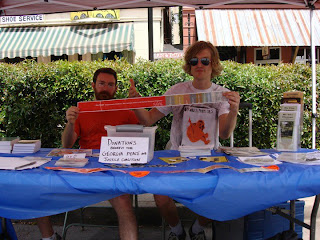 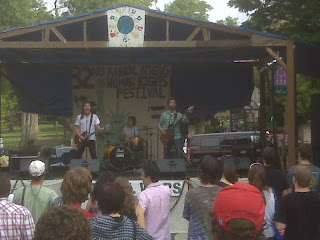 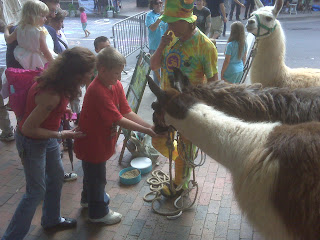 We were invited to speak at the 31st annual Athens Human Rights Festival which took place May 1-2. This years festival's focus was immigration reform. The festival started in 1979 in commemoration of the four Kent state students that were killed when the national guard indiscriminately opened fire during on a non-violent anti-war demonstration on the campus.

With the help of Mitch Roper, with the Georgia Peace and Justice Coalition, we set up an information booth all weekend. The festival was a great opportunity to hear great music, network with other great organizations, and hear a number of dynamic speakers.

We were invited to speak about the true human cost of the militarization of our culture. Of course Athens is no stranger to the cost of our bloated military budget, which represents 59% percent of our spending this year. As a result of of the massive amount of money that goes to support fighting wars and arming the world UGA students will likely face a 78% tuition increase, families in Clarke county will have their homes foreclosed on, and local high school students will be forced to learn first hand about the poverty draft.

It is time that we begin to see each dollar spent on these wars as a robbery from our communities, that every Iraqi/Afghan/Palestinian civilian killed in these wars is an shameful smudge on our national consciousness, and that if our national priorities are to change that we must be the agents of that change.
Posted by Atlanta Economic Justice Program/AFSC at 10:53 PM