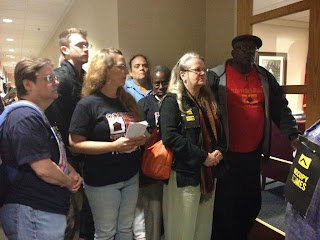 This group includes Mark Harris, a Desert Storm veteran evicted at gunpoint by Fannie Mae last August from his home in Avondale Estates, Nancy Daniell, a senior citizen whose Duluth home was wrongfully foreclosed on by Nationstar on behalf of Freddie Mac, and Zannie Jackson, a Fannie Mae homeowner and dialysis patient worried about keeping a roof over his head in addition to fighting for his life. Monday's action is the culmination of Atlanta's Housing Justice Academy, a three day training in home defense and non-violent direct action, attended by homeowners, renters, and activists from around the Southeast organized by the American Friends Service Committee and Occupy Our Homes Atlanta. 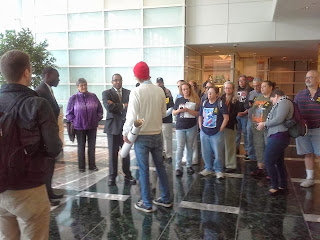 At around 1pm fourty home defenders, many of whom are at risk of losing their homes, entered Johnny Isakson's office building where we were immediately told that we would not be allowed into his office despite the fact that folks had driven hundreds of miles to meet with someone from the Senator's office. Finally we decided to go up to the senator's office anyway. Once outside his office we were refused admittance and told no one would meet with us today, which didn't stop us. We stood outside the office until someone met with us. A staff opened the door and offered to meet with us in the doorway without allowing us through the door. They basically wanted to take whatever information we had on paper and be done with us, instead we had a line of struggling residents ready to tell their stories and let Senator Isakson's staff understand what appointing a permanent FHFA director could mean for folks. After several residents shared their story's we then unrolled a large banner that said "#not1moreeviction".

The group spent another hour or so outside the senators office holding signs and granting press interviews.

A vote in the Senate to confirm a new director of the FHFA will happen early this week.  As this confirmation hearing approaches residents are advocating for a confirmation of a permanent Director of the FHFA. Since Senator Isakson and his fellow Republican congresspeople have threatened to filibuster Watt's confirmation, the residents staged a "filibuster" at Isakson’s office, by sharing the laundry list of violations and injustices of the FHFA. The confirmation of a permanent director FHFA  could mean principal reduction for hundreds of thousands of struggling American homeowners. It could also mean the turning over of Fannie Mae/Freddie Mac vacant properties over the community organizations for the use of affordable housing. 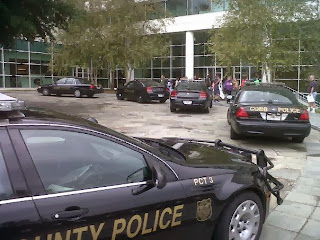 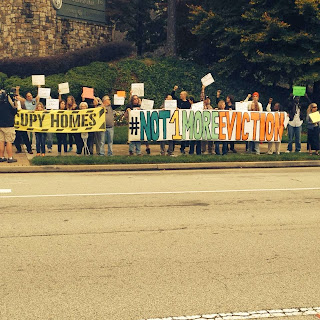 Similar protests will be taking place around the country on Monday as part of a national day of action to demand that there is "Not 1 More Eviction" until a new permanent director is confirmed by the Senate. These actions are part of the larger movement to "Dump Ed DeMarco," acting Director of FHFA, and reverse his policies that have been devastating to both homeowners and renters.  More than half of all mortgages in the US are managed by Fannie Mae and Freddie Mac. Even with all the current talk of housing recovery, 13 million homeowners are still underwater.FHFA’s continued  refusal to reduce principal to current value has hurt the economy, pushing millions of homeowners into the streets.