Taking on Slum Lords in the Bluff 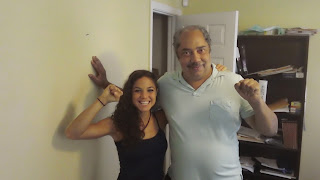 Marshall Rancifer is a passionate advocate and service worker who dedicates most of his time -- weekdays, weekends, and evenings -- to the needs of residents of the Bluff. While the city of Atlanta has long neglected this English Avenue neighborhood, denying its residents access to basic needs and services, Marshall tirelessly offers direct service to those seeking drug treatment, employment, HIV testing, or shelter. As a recovered drug addict who once lived on Atlanta's streets, Marshall is all too familiar with the unjustifiable abuse the city inflicts on the homeless, even in a neighborhood filled with empty houses. Now, Marshall's own right to housing is again under attack.

In order to live close to the Atlanta Harm Reduction Center Marshall decided to rent a small room across the street from the center.

The living situation has ended up being pretty terrible. Not only is it an unsanctioned boarding house but there’s no heat or AC, there’s unfinished walls, and bathroom piping that doesn’t work.
Last night Marshall had a dispute with his landlord over his balance and instead of working out an agreement, or following the proper eviction channels, Marshall’s landlord simple attempted to pull a “self help” eviction.  A “Self Help” eviction is basically where a landlord tries to strong arm a tenant out of their home using intimidation, In Georgia “Self Help” evictions are unlawful.

Marshall’s landlord removed his door and cut the power off to his room, both actions are considered unlawful. Today we responded by giving the landlord till the end of the day to restore power and replace Marshall’s door. We also told him that we needed Marshall to be able to stay in his room for the next two weeks while he finds a new place, as Marshall doesn’t want to stay there.

Marshall’s landlord agreed to our terms so we expect that the power will be back on and Marshall’s belongings will be safe by the days end.

It’s sad to say by communities like English Avenue are crawling with slum lords who often assume that human and civil rights don’t apply to the people they are building their wealth off of; their tenants.

It’s time we start making it clear that slum lording will not be tolerated in our city anymore. Every time we fight and we win, it makes more space for others to fight and wins, it creates less space for slum lords to exist.
Posted by Atlanta Economic Justice Program/AFSC at 5:26 PM