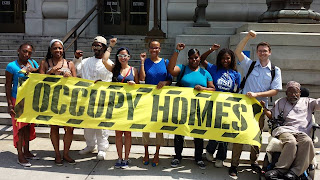 After stopping her home from selling on the courthouse steps Occupy Our Homes Atlanta launched on online petition for Latonis Wilson. Only a few days later Latonia recieved a disposseory from the owner of the home Dan West. Latonia and her allies quickly organized to housing justice cookouts to prove that she could fill her yard with supporters. 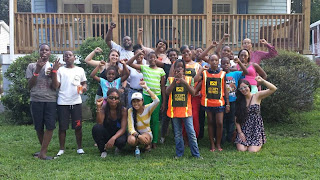 AFSC was delighted to participate in organizing around Latonia's home. It was a pleasure to spend time at her home with her beautiful children, it was clear that Latonia and her family is deeply loved in her community.


Negotiation for Latonia's home started earlier this week.Today Latonia came to court with multiple supporters to face Dan West's lawyer in disposesory court to see if they could finalize a deal that would keep Latonia in her home. After much back and fourth a deal was struck that keeps Latonia in her home.

The difference we see when we fight along side each other, rather than fighting alone, is often the difference between victory and defeat.
Posted by Atlanta Economic Justice Program/AFSC at 3:18 PM