Community Fights Back Against Forclosure Auction Of Single Mother 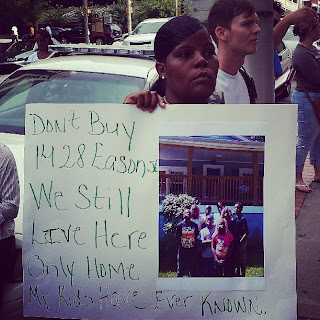 Latonia Wilson and her family were set to have their home auctioned off on the Fulton County courthouse steps today.

After trying to talk to their mortgage company, Performance View LLC, they have been met with no response to their requests to work out a deal that keeps them in the home. Latonia took out a lease to own deal on the house a few years ago for $50,000. According to property tax records, the house is currently appraised at $13,000. Now she's unemployed and needs Dan West with Performance View LLC to work with her to keep her in the home. Dan West has a shady history, his listed office space is non-existent, and he needs to be held accountable. Read about his past dealings as head of Intown Venture. 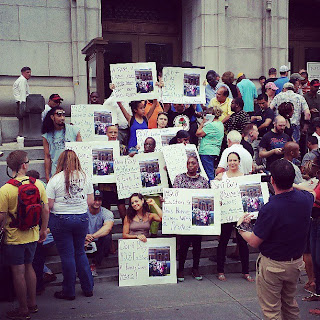 Today, rather than sitting back and letting a profit hungry investor/Wallstreet hedge fund buy Latonia's home from underneath here, we decided to show up in force with and hold up pictures of Latonia and her family in front of the house. We wanted to make it clear that this home was filled with people who are loved and needed in their community, that whoever purchases the home will have to deal with us. When it came time for Latonia's home to be auctioned, no one would bid on it. 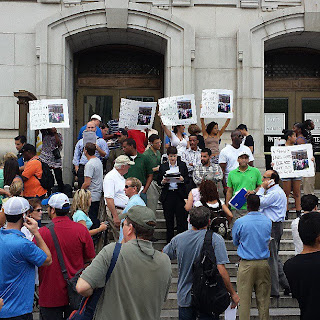 There's still a long way to go for Latonia's struggle. Today we made sure that the property did not change hands to an unknown investor, instead it went back to Performance View LLC, who now has the power to move forward on the eviction of Latonia's family.

Latonia lives in a community that has been rocked by the housing crisis. There are already enough empty homes in Latonia's community, mostly the result of really bad loans pushed on folks, including Latonia. It's time we stop blaming the victims and start fixing the problem in our city. Please sign and share Latonia's online petition.
Posted by Atlanta Economic Justice Program/AFSC at 2:24 PM