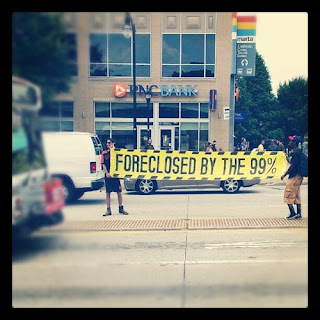 Over the last few days Occupy Our Homes ATL has organized two solidarity actions against PNC Bank for the wrongful foreclosure of the Cruz family in Minneapolis.

In Atlanta today 50 of us entered a PNC branch with a goal not to target branch staff, but to make it clear that Occupy Our Homes is a national movement, and we will not allow our neighborhoods to be held hostage by the banks any longer. Injustice anywhere is an injustice everywhere.

Here is the lastest from Occupy  Homes MN: 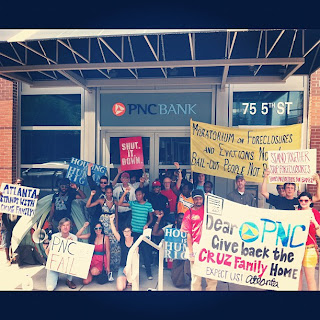 This morning David and Alejandra Cruz went back to PNC Bank's headquarters in Pittsburgh to demand a meeting with PNC executives that have the authority to offer them a good faith negotiation (yesterday they were pawned off on low level PR representatives with no intention of negotiating who disrespected the family). When they arrived at the bank, they were locked out from the building.


Despite having traveled 800 miles as their petition has soared beyond 100,000 signatures, PNC Bank's head of security, John Weslager, had this message to deliver to David and Alejandra: "PNC Bank has washed their hands of this issue."

“We will not be shamed out of
what we deserve when PNC Bank is the one who should be ashamed of their
behavior. We deserve dignity and a meeting with those who can renegotiate our
mortgage.” Alejandra Cruz said to the crowd of supporters in Pittsburgh after
the meeting. “We are not giving up. This is not the
end.”

AFSC is excited to continue to play an active role in supporting this historic movement and encourage others to do the same.