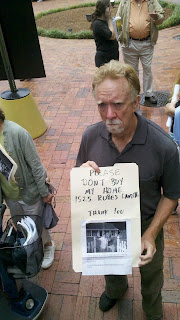 Just 24 hours before the monthly home auctions that occur at every County Courthouse in the state, Occupy Our Homes ATL  had several frantic homeowners reach out. Why are they frantic? ...Because their homes were set to be auctioned off today on the court house steps.


The story of Pearl Scott, a Fulton County resident looking to defend her home from foreclosure, sounds like that of many others in the state of Georgia and across the country. She has lived in her Vine City home for seventeen years and kept up with her mortgage payments for all that time until just a few months ago. Pearl Scott is a 69 year old retiree who is now getting by on her Social Security checks and is struggling to make ends meet, but she is determined to stay in her home. Even after falling behind on her mortgage at the beginning of the year, she continued to diligently send in every penny she could afford. All of Ms. Scott's efforts seemed to have been in vain when she was informed that her home was set to be auctioned off. Rather than giving in, Ms. Scott reached out to Occupy Our Homes Atlanta to help her come up with a plan to save her home from being auctioned off to investors. 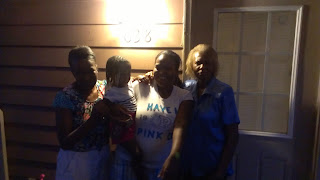 The Scott Family's last minute efforts to save their home inspired fellow homeowner Steve Boudreaux to take action to save his own home on the Cobb County Courthouse steps (on the Roswell Street side). Occupy Our Homes Atlanta joined both the Scotts and Steve this morning in Fulton and Cobb respectively to discourage anyone from bidding on their homes.

After a long day of vigilantly listening for their addresses to be cried out and their homes bid on, Pearl Scott and Steve Boudreaux can rest a little easier now. Homeowners and dozens of allies turned out with enlarged family photos and signs that read "Buy this home and you get an occupation for free!" to discourage investors from bidding on their homes. And it worked! No one bid on Pearl's home at the Fulton County auction, nor on Steve's in Cobb County. In fact, investors and homeowners all gathered round to see if anyone dared bid on the properties. 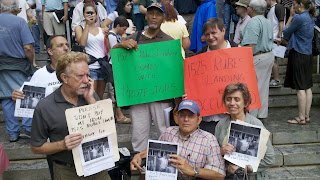 While the homes were not purchased, we know Pearl and Steve's fights to stay in their homes are far from over. Occupy Our Homes Atlanta is committed to pressuring Everhome Mortgage and Wells Fargo respectively to make deals that will keep a secure roof over their heads.

In Cobb county, a coalition of everyday people--inspired by Steve's struggle--formed on those very courthouse steps. They are excited to meet next week to start building a campaign to demand that Wells Fargo keep Steve in his home.

AFSC is excited about the new doors of nonviolent resistance that Occupy Our Homes has opened all over the country, and we plan to continue to support the movement.
Posted by Atlanta Economic Justice Program/AFSC at 10:31 AM