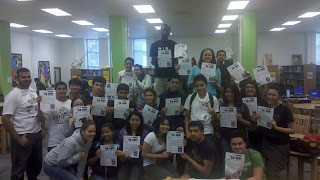 Yesterday I was invited by several Cross Keys High School students who I've worked with Through Student Career Alternatives Program.

The meeting was called in response to the impact that the viral youtube video Kony 2012 has had on Cross Keys students.

The meeting was really well attended and I was super encouraged at how politically astute all the students were. They had already developed the analysis that the Invisible Children organization that put together the Kony 2012 campaign was problematic, but the students wanted to harness the hunger for social change that the viral video evoked in their classmates.

We spent some time talking about local issues that students would like to address including immigration reform, homophobia, homelessness, and teen pregnancy. Several of the students suggested meeting again and attempting to pull in students from other area high schools.

Everyone in the meeting committed to come out to this Saturday's rally against SB 469 which criminalizes disent.

I'm really encouraged to see students stepping up to create the Atlanta they want to live in.

Please spread the world about the next meeting which is open to all Atlanta area teens!