Occupy AT&T, Not Going Away 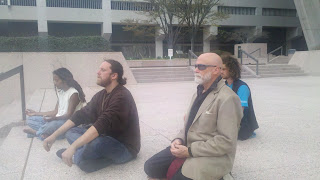 The Occupation of AT&T started on February 13th, the day before Valentine’s Day, with 13 tents. The mission was simple; win back 740 good paying union jobs from a company that’s pulling record profits.

Since them the occupation has grown, adding almost a tent every day and exploring creative ways to escalate our campaign to save much needed jobs.

The task is nowhere near over but there has been progress. AT&T is on the defense and we know that they have rescinded 33 of the layoffs, which is a good start.
The last two days there have been multiple mic checks in side of several AT&T buildings and a group meditation on the steps of AT&T in an effort to build compassion in the hearts of seemingly heartless AT&T executives.


This Saturday join workers and their families for a Family fun day at the steps of AT&T.