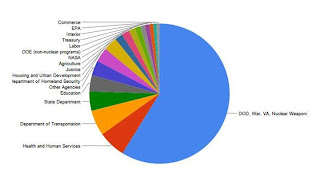 It’s simple math: A military budget that has doubled in twelve years + worries about the resulting deficit = deep cuts to military spending.

Yet in a display of backward logic, the House majority’s initial announcement of planned cuts to current spending only included cuts to non-military discretionary spending, the spending that helps invest in our communities, schools, and our economic infrastructure. It seems the Pentagon has developed the ultimate cloaking mechanism -- to protect military budget bloat from mathematical reality.

The US military budget currently accounts for over half of our discretionary budget -- and nearly half of all military spending the world over.

Despite this incredibly lop-sided investment, increased military appropriations are set to glide past Congressional “budget hawks” like Harry Potter in his invisibility cloak. Meanwhile the fragments of federal funding which would address human needs, long-term infrastructure, or non-military actions in the world are scrutinized down to the dollar – at a time when the number of Americans in need is growing with every lost job or home foreclosure.

Reducing government spending by shrinking investments in our long-term well-being rather than cutting the military budget is as sensible as dieting by cutting back on salad while eating three desserts a day.

Even cutting nearly a trillion dollars out of the defense budget over the next ten years—a sliver off that third dessert— would leave us spending 14 percent more than we did during the Cold War era, according to analysis by the Sustainable Defense Task Force.

Yet the measure the House will consider this week for FY 2011 funding would cut just 2.8 percent from the president's FY 2011 defense budget request, compared with 20.6 percent from the budget for non-military foreign operations. Under this proposal the “Defense” budget will still increase by $8.1 billion dollars from the previous year.

We invest tax dollars in a shared safety net so it will be there to catch us during hard times. In our current slow-grinding economic crisis, more Americans have fallen into poverty, needing help with things like food and housing. The fact that the burden has increased on such programs as low-income housing and preventive health care clearly shows they are needed more than ever, not that they should be taken away.

Jack Lew, the Director for the White House Office of Management and Budget, writes that, “the sacrifices needed to begin putting our fiscal house in order must be broadly shared.” Yet all the cuts being proposed this week in Congress hit low- and middle-income families and communities the hardest.

Lew says the easy cuts are behind us. But simple math above says we have yet to seriously consider them. It’s time to pull back the cloak and make budget cuts where we need them most: in our off-the-charts military spending habit.

Robin Aura Kanegis serves as Director of Public Policy and Washington Office for the American Friends Service Committee (AFSC), a Quaker-based organization working for peace, social justice and nonviolent change. She provides strategic direction for all aspects of the organization’s engagement with Congress and the Administration. Visit AFSC at www.afsc.org.