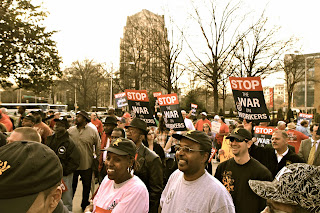 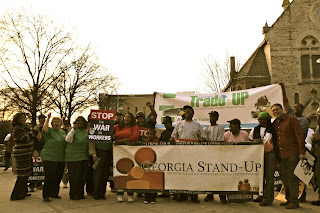 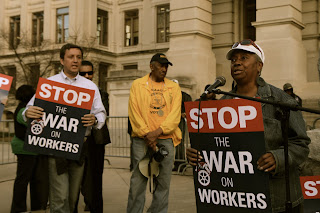 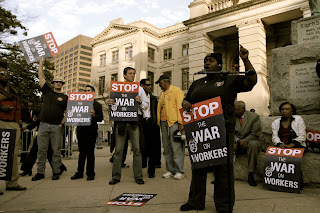 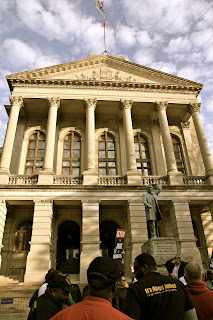 Today hundreds of people rallied at the steps of the capitol to demand a halt on the attacks against the rights of working people, no only in Wisconsin, but here in Georgia as well. The crowd was large, and very spirited. Scanning the crowd it was clear that the rally brought together folks from dozens of different organizations.

Wisconsin may very well be the beginning of what some might call the awakening of a sleeping giant. That sleeping giant being the American working class. It's a cruel irony that the war's in Iraq and Afghanistan(fought by working class folks) have produced such enormous profits for several multi national corporations, and now the working class is having to foot the bill.

The reality is that by cutting military spend by 1/3 and sending non-violent drug offenders to treatment instead of prison we would have plenty of resources. If the military budget was decreased by 1/3 we would still be more than outspending every other countries military and something must be done to address the phenomenal fact that the US has the largest prison population in the world; not per capita, just period.

There's of course many other solutions to today's economic crisis of priority that don't include forcing kids and the working class to deal with problems that they didn't create.

I hope that today's demonstration, and the increase in grassroots organizing that I've witnessed over the past six months, is the beginning of new alliances. I hope now the time is upon us where struggles will go beyond making the verbal/mental connections between the violent oppressive systems that control our minds, body's, and communities. Now is the time to make those connections physical, make them in the streets, in the churches, on the campus, and in our communities.

Together we can create a choir so loud it's irresistible, impossible to stop, like a runaway train roaring towards an inevitable destination. Real change(no the fake kind you hear about when it's time to elect a new person).