Sexual Assault in the US Military: Who will become the next statistic? 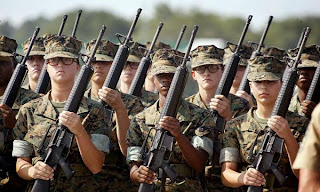 The Service Women’s Action Network recently helped to file a class action suit on the behalf of a number of women and men who say they have been sexually victimized by their peers, or their commands in the military. Former Secretary of Defense Donald Rumsfeld and current Secretary of Defense Robert Gates are named as the defendants whose complicit inattentiveness enabled a culture of silence and injustice to prevail. While Post Traumatic Stress Disorder (PTSD) has developed into a new buzz word as a result of the U.S. wars in the Middle East, Military Sexual Trauma (MST) is not something we often hear about and some argue that we don’t because the Pentagon does not want us to. This landmark class action suit is yet another attempt to break the silence.

Sexual assault at any time and under any circumstance is a horrible thing. On many occasions the victim not only has to deal with the trauma of the attack, but is also traumatized by the process through which they seek justice. It can be mentally and emotionally tasking for a victim pursuing justice through the civilian system of jurisprudence, and it can be even more tasking for those who are victimized by a peer or a superior in the United States military. In an effort to deflect criticism on this concern, the Department of Defense not long ago announced efforts to monitor the predatory elements within its ranks with more alertness and diligence. According to a March 2008 Department of Defense report tracking reported cases of sexual assault in 2007; one in three female soldiers will be the victim of sexual assault while serving in the military. This is in comparison to one in six women who will become the victims of sexual assault in the civilian population of the United States of America.

The report and its contents are important for young women to consider if they are thinking about enlisting but it should be noted that men are also raped in the military. On average, between 8 to 9 percent of sexual assault victims in the military are male with only about 2 to 5 percent of men assaulted believed to be gay according to estimates provided by therapists. Of course, military sexual assault doesn’t only just happen on US military bases and forward operating stations. In 2006, the Associate Press released a report citing cases of more than 100 rapes or sexual assaults of teenage women by military recruiters. According to the report:

It is likely that many potential recruits will never know about this particular occupational hazard nor the related data associated with its pervasiveness throughout the military during their decision making process. Why? Because most military recruiters will not offer this as a point of concern for recruits to consider, most high school guidance counselors are unaware about this aspect of military life, and most parents of potential recruits are only told about the benefits of enlistment. Therefore it is more likely that a young person considering enlisting will only learn about how they will earn a steady paycheck, get great health benefits, be eligible to receive money for college, and receive job training. If the question about sexual assault is even presented to a recruiter it is likely that the recruiter will do the same shuffle recruiters have been caught on record doing when asked the question, “Will I be deployed to the war?” Thinking that a drill instructor, a commanding officer, or another enlisted member could be a potential sexual predator is not something that recruits are encouraged to consider. Yet, that understanding could be the very thing that helps them to make a truly educated decision.

The Department of Defense report also mentions that each of the service branches are charged with aggressively working on this issue, however, the hyper-masculine culture of the military makes is partly responsible for the difficulty victims have to deal with and also makes it possible for those who commit sexual assault to get away with it. It is not easy to clean up a culture of impunity and the reality is that the Department of Defense only started its tracking program in 2006 after Congress ordered it to address the situation. While some elements of the top military brass may authentically seek to alter the reality for women in uniform the fact remains that about 80% of rapes in the military still go unreported.

Many victims do not report their assaults for a variety of reasons some of which include the shame they feel, or because they think they know enough about their chain of command and the reporting process to conclude that they might not be believed, or worse. In the case of the military, it is the commanding officer of the service member who makes the decision whether or not a criminal case can be brought against the accused. This reality gives commanders a wide range of discretion and, recognizing that there still exists an “old boy network” in the military, it is not a stretch for commanders who are sympathetic to the accused to become an obstacle in the pursuit of justice.

The Pentagon considers the increase in court-martials to be progress, but the most staggering statistic in the reports is not one that is very high in comparison to the other statistics; 251 incidents of sexual assault occurred in combat areas. Considering that youth are inundated with recruiting messages about honor, duty, and serving one’s country via the military it must be incredibly challenging for a young woman raped in a combat zone to then process the difference between the enemy she is told to fight and the enemy who wears the same uniform she does. While many are coming back from their deployments afflicted with Post Traumatic Stress Disorder because of their exposure to war we don’t pay enough attention to those coming back from those same war zones with PTSD because they have been physically traumatized by a colleague.

Fear of retaliation is among the reasons why some don’t report an assault and it is not uncommon for a victim to have to endure working side by side with their alleged attacker while the investigation process ensues. There have even been cases where victims reported having to salute their attacker everyday. When testifying before a 2004 Congressional Women’s Caucus hearing on sexual assault in the military, Christine Hansen, Executive Director of the Miles Foundation stated:

“Tobey is a lieutenant in the U.S. Air Force. She was allegedly assaulted by a fellow officer. According to her testimony, military criminal investigators and JAG officers told her, ‘If I were the defense attorney, I would tell you that you gave the offender mixed signals and that ‘no’ was not enough.’ She recalls that she did not just say ‘no’. She physically held on to her panties. She salutes her assailant every day. She trained for over a year for a highly classified mission. She has since lost her security clearance. She concludes her testimony with, ‘I feel like I am being punished for a rape that happened to me.’”

Though the challenge of keeping quiet may ultimately add to the stress a victim has to endure and possibly even put them at risk of other attacks, it could seem like practical, common sense to not report a crime just so that the victim can attempt to jump over career related hurdles with more ease. Enough victims of MST in the military know stories like the one Christine Hansen testified to and think better of reporting an assault assuming that it would only make things worse then they already are. To underscore this reality, only one of the plaintiffs in the MST class action lawsuit is still in the military. The other seventeen plaintiffs are all military veterans.

Another major hurdle for victims of sexual assault in the military is the lack of support they receive from their service branches and the Veterans Administration. Currently, there are not many medical therapy options provided by the Veterans Administration for service members suffering from the after shocks of a sexual assault and what does exist is difficult for affected service members to find. Comprehensive medical and psychiatric treatment often doesn’t occur while still serving in the military if the crime has not been reported and while there are many reasons why a victim may choose not to report an assault a big reason is because the victim may not want the medical psychiatric treatment showing up in their military record.

Medical and psychiatric records are taken into account when a service member is considered for promotion, or a higher grade of security clearance. Those who visit a mental health professional through military channels can have their consideration for promotion withdrawn, or their existing security clearances revoked. Those who understand the culture of retaliation in the military and are aware that receiving medical services could be an obstacle to career advancement will likely avoid the healthcare opportunity even if it means they receive no justice and no structured healing process.

The MST class action lawsuit is a game changer for both men and women in the military. It lifts up the concern in a way that has not been done before and attempts to lay the blame at the feet of those whose charge it is to govern our military system. It is hoped that this suit, combined with the recent end to the controversial Don’t Ask/Don’t Tell policy in the military, will help to change certain parts of the military culture that are in stark contrast to democratic values and constitutional provisions. To view the entire lawsuit you can visit: http://servicewomen.org/our-work/litigation/mst-class-action-lawsuit/ and download the PDF. You can also sign the SWAN petition to end rape, sexual assault and sexual harassment in the military here: http://www.ipetitions.com/petition/endmilitaryrape/