CHANGING THE NARRATIVE: APD, ARRESTED PROTESTORS & THE RIGHT TO DISSENT 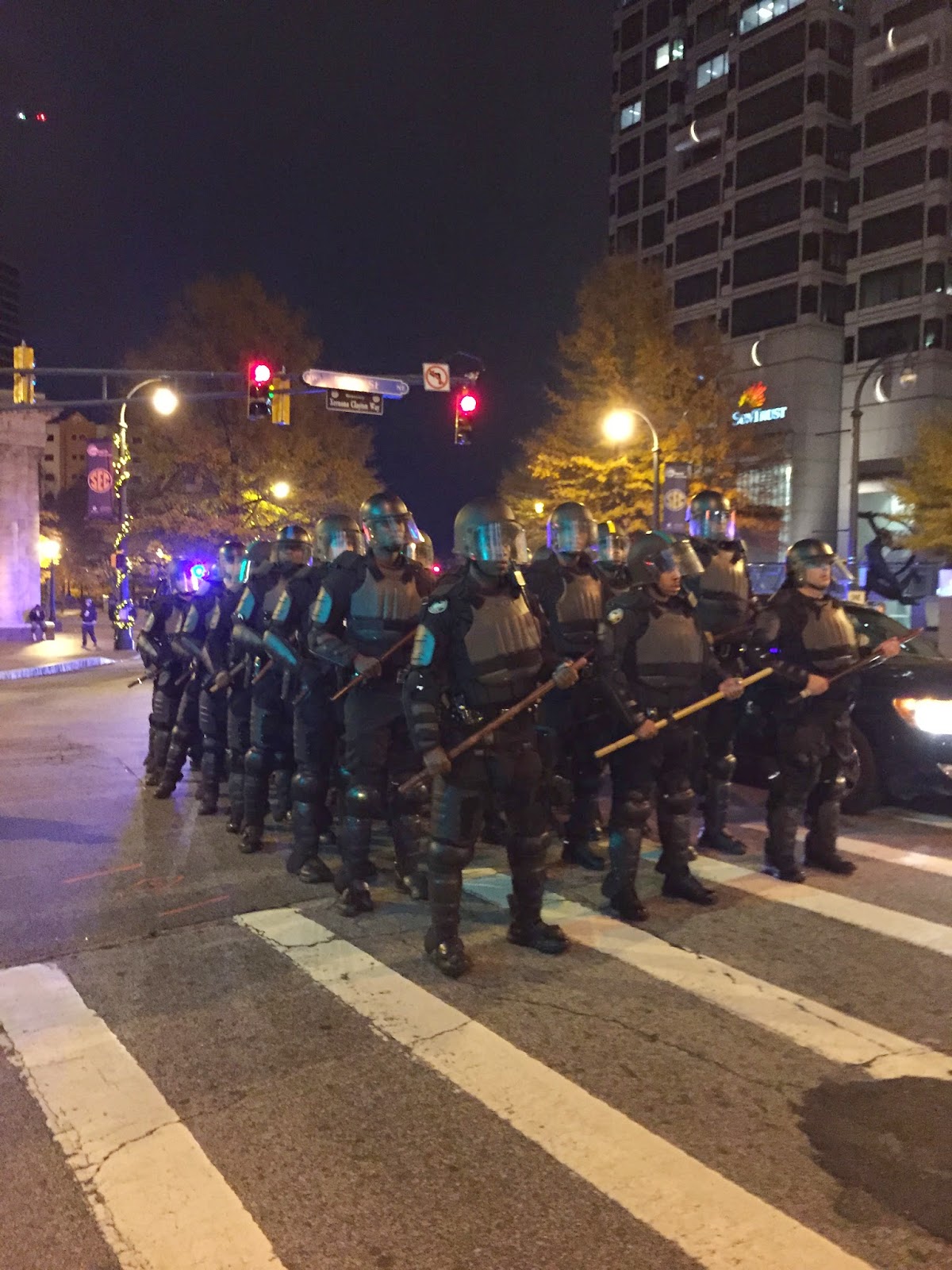 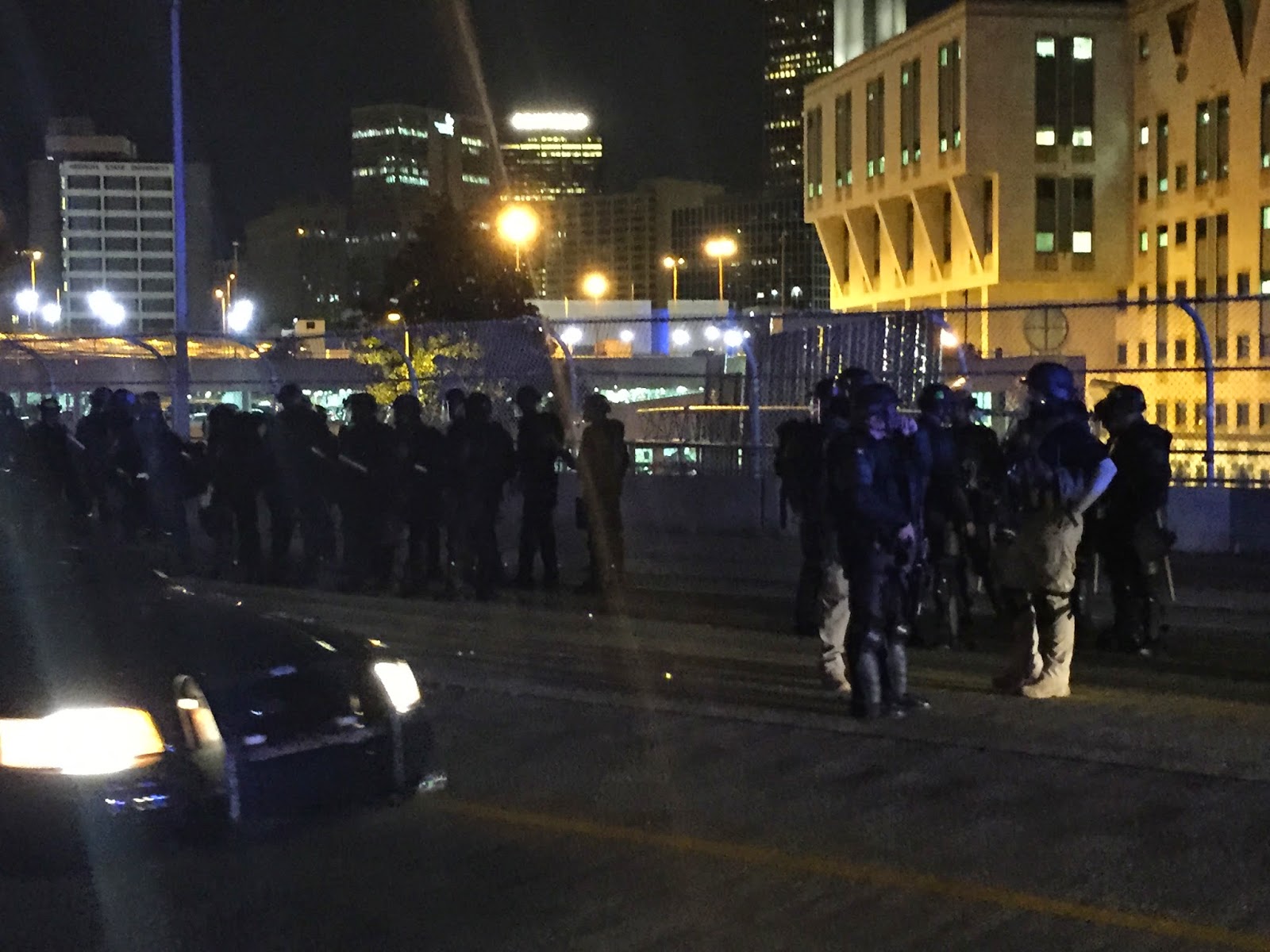 As the march progressed up Peachtree, towards Ivan Allen Blvd., the visible presence of riot squads steadily grew, and a hefty perimeter was formed around protestors, the weightiest contingency grouped across Ivan Allen, thereby stopping the march in its tracks. At this point, dispersal orders were given from various officers, most notably a diminutive, well-groomed ranking officer with a megaphone. The mantra, “you have destroyed property, this assembly is unlawful, you will be arrested if you do not disperse,” was repeated. At the SW corner of that intersection, a group of 4-5 officers took it upon themselves to forcibly seize what had been a wide banner, supported by wooden posts, which read, “Black Lives Matter” from a group of protestors. The banner was torn, and in a particularly heightened moment, the posts were pointed back at protestors, conjuring an image eerily reminiscent of the famous photo of an American flag being jousted at a young man of color during Boston’s busing riots in the 1960’s. It was immediately after this that arrests began, seemingly randomly; if one happened to be in the front line of marchers, or in the wrong spot along the sidewalk, one was at risk of being apprehended. Indeed, to a man, not one of those arrested had been complicit in any way, shape, or form in the earlier destruction of property, and most were detained arbitrarily, as marchers attempted to re-route away from the blockades.
Aside from being effectively innocent bystanders, as were all of those arraigned Wednesday, a number of arrestees were detained amidst uniquely shabby circumstances, and a few sustained injuries at the hands of police:
Nile Bean was working at the downtown Hyatt hotel, adjacent to the dispersing march. He stepped outside, curious as to what was transpiring, and began to film the scene. As one of his feet flirted with the curb, he was grabbed, slammed to the ground, and arrested. Local photographer Steve Eberhardt was able to document much of this.
A young, interracial couple, Renzo Marches and Natasha Stewart, became alarmed when they saw the presence of militarized police units. They turned away from the main group, and pulled scarves across their faces, anticipating a possible pepper spray/teargas deployment. As soon as they had done so, they were accused of “inciting” and “wearing masks.” Ms. Stewart was pulled, by the scarf, incurring bruising to her neck, and Mr. Marches was thrown to the street; injuries to his leg and face were displayed in photographs at a press conference which followed Wednesday’s arraignment.
Corey Toole, a young black student, was also apprehended at random, and managed to gain access to his phone from the back of a prisoner van; he posted a troubling image of a bloodied, beaten face to Twitter, while the march was still ongoing, and his injuries remain visible to this day. Samuel Albanez, a Hispanic male who has worked for some time with local NAACP chapters, sustained injuries excessive enough to keep him at Grady Hospital overnight, resulting in a booking the following day.
The rest of the arrests occurred over the next two hours. Arrestees were released between 3am-8am the following day, and appeared in court that afternoon, November 26th, where arraignment was postponed until January. Two members of the press had also been detained, but per the Mayor’s orders, charges against them were dropped in the morning.
Following Wednesday’s court proceedings, 14 of those initially charged pled not guilty, and await a hearing on January 21st to determine a trial date, presumably to be set for mid-February. Six of the remaining defendants were granted dismissals, due to “ticket discrepancies,” on the part of arresting officers, while one man, a member of CopWatch, had charges dismissed due to video evidence provided to the prosecution amidst court proceedings by Atlanta’s NBC affiliate, 11Alive News. The footage clearly demonstrated that he had been filming the events on the street, and had violated no appreciable laws. Regrettably, another member of CopWatch also appeared in the video in the same capacity, but had already pled not guilty when the video appeared; as such, he will have to re-appear when a trial date is set. One remaining arrestee sought private counsel, and chose to plead no contest for personal reasons, receiving a commuted 2-day sentence and a small fine.
The assemblage of volunteer attorneys have indicated that their aim in this case is to achieve general dismissals, and have expressed vigorous confidence to that end, and no less. Without reserve, it is this author’s unwavering opinion that anything but dismissal would be an odious moment for the City and its administration; this is an opportunity for city officials to concede their own error, unfortunately disproportionate response, or perhaps even more germane to the issue at-large, to retract the narrative of irresponsibility and criminality previously ascribed to a group of well-intentioned, non-violent protestors. It would behoove the mayor, and the courts, to provide a show of magnanimousness, and embrace Atlanta’s Civil Rights legacy in a meaningful way, rather than persisting on a path of punitive chicanery, and politics of fear.