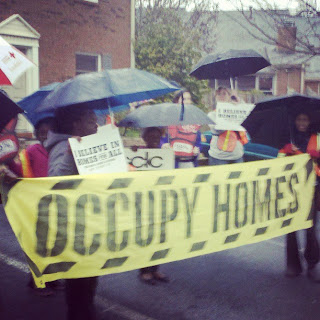 Today, a coalition of groups including American Friends Service Committee and Occupy Our Homes Atlanta, joined members of the Stone Mountain community to help Mildred Garrison Obi march to the home that she was evicted by force from just months ago. The purpose of the march was simple, move Mildred back into her home. 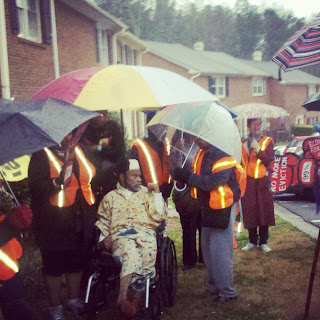 In 2008, after the financial crisis caused the economy to collapse, Mildred lost her job
and fell behind on her payments. As a senior in her 60s, she found it increasingly
difficult to find employment. When the bills started to pile up, she contacted Bank of
America, who had acquired Countrywide earlier that year and now serviced her loan. In
August of 2009, despite her best efforts to work out a modification with them, Bank of
America sold her home on the Dekalb County courthouse steps.

It was only after the foreclosure that Mildred realized her loan was part of a securitized
trust overseen by US Bank. As was the case in most foreclosures filed in 2009, the
documents used to take her home were fraudulent and robo-signed. For years she
fought to have the foreclosure rescinded, going back and forth between Bank of
America and US Bank, who both refused to claim responsibility.

In 2012 she even submitted her case to the Independent Foreclosure Review Board,
which was created as part of the $25 billion settlement with the state AGs, promising
relief to homeowners foreclosed on between 2009-2010. The process turned out to be a
waste of time, and in November, she was evicted from her home. Not surprisingly, just a
couple of months later, after little to no relief had reached homeowners, the OCC
declared the Independent Foreclosure Review Board a failure and did away with the
program all together. 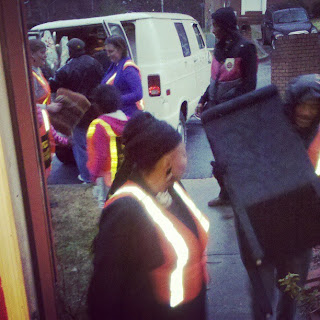 Today Mildred and her community approached her home holding banners and wearing orange vests emblazoned with Occupy Homes, chanting "ain't nobody gonna turn me around". When they reached the house, people circled around to listen as Reverend Kelvin Peterson, Mildred's longtime pastor, recited a prayer, referencing the cruelty of leaving thousands of homes vacant while people were left out in the cold, repeatedly asking "where is God?" Emotions were high as Mildred finally approached the door to the home that was stolen from her. She turned the knob, and paused, with tears in her eyes, to make one simple yet powerful statement; "I'm not homeless. I'm not homeless. "

Once inside, an assembly line was set up to bring her belongings inside and people began to clean up the mess left by the eviction crew, and from the home sitting empty 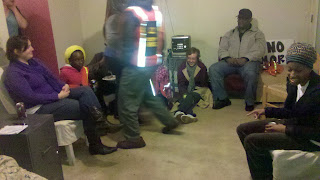 for months. By the time the sun went down, it began to feel like any other home where friends gathered to eat dinner and share stories together. It's still uncertain what happens next, but for now one thing is clear; tonight there is one less vacant home in
Stone Mountain, and as Mildred emotionally stated earlier in the day, she's not homeless.