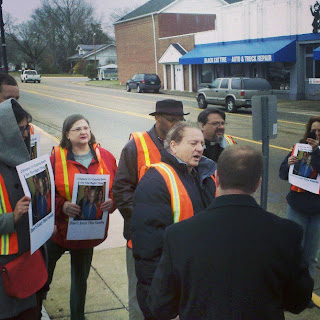 This past Wednesday, Housing Justice Advocates held a press conference and demonstration alongside the Horn Family in front of Citizens Tri County Bank headquarters in Dunlap Tennessee.


Helen Horn is 86 years old. She current suffers from advanced dementia. Helen and her husband (now deceased) had a small retail business on the front street of their small town for 60 years. They did everything right. They had excellent credit. They taught their children, Terry and Cheri right from wrong, most importantly, to do unto others as you would have them do unto you, and to always take care of the less fortunate.

Besides their retail business they invested in property on the side because they wanted something for their retirement and they always wanted to give something to their children. 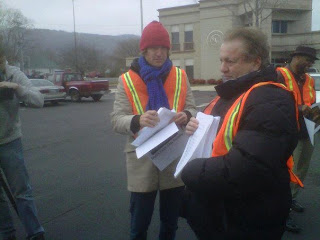 Knowing that her house of 45 years was free and clear, they are attempting to place a lien on the home in order to repossess it, which would leave her homeless. When the bank found out she transferred the home to her adult children 18 months ago, they sued her children for fraudulent transfer. The Bank is determined to get the home. 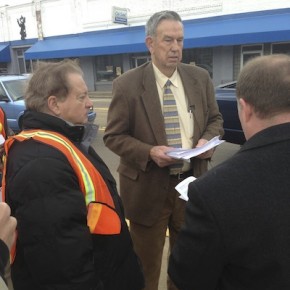 Our message to Citizens Tri County Bank was simple; you've gotten enough out of this family. It's time to do the right thing and make a deal that keeps the Horns in their home. One of Terry's goals was to delivering a petition, which had been signed by 7,131 people all over the Country to Citizens’ Tri-County Bank CEO Glenn Barker after holding a brief press conference outside the bank.

The unexpected happen, Mr. Barker walked right out of the bank during our press conference, while Terry was speaking, and made a statement. It was hard to understand exactly what he was trying to say but it was something along the lines of, "we can't relieve all of our costomers debts".

The local coverage of the action was great:http://www.newschannel9.com/news/top-stories/stories/thousands-support-86yearold-widow-fight-home-4447.shtml

Posted by Atlanta Economic Justice Program/AFSC at 12:06 AM