Letter To The President 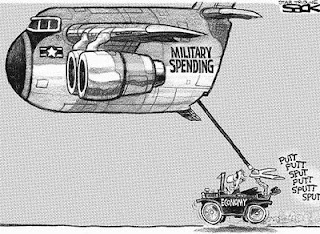 Dear President Obama: Move the Money from the Military

As you begin your second term in office next week, we hope you will let the U.S. public in on one of Washington’s best-kept open secrets:  We’re not broke.

Of course, you – along with many on Capitol Hill – know full well that the dire warnings of disaster if we do not drastically cut safety net programs, enforcement of environmental protections, or job creation and training initiatives are patently false. We are a wealthy nation with the means to secure the common good for generations to come.  But like a family blowing our money on luxury vehicles – such as the $610 million-per-plane F-35 – while failing to keep a roof over our head, we urgently need to reexamine our priorities.

Our federal budget should reflect the things that make us a thriving, sustainable, secure society. Instead, nearly 60 percent of the discretionary budget is now directed toward an incredibly narrow definition of security—the Pentagon budget and other military-related spending.  This grossly disproportionate national “security” spending is making us deeply insecure.

In fact, many within the defense community share this viewpoint.  Among others, Brig. General John Johns and Lt. General Robert Gard recently stated that, “Cutting Pentagon spending recognizes that national security is more than military power. The U.S. is stronger with a strong economy, sustainable jobs, investment in education, renewal of our infrastructure and a sensible energy strategy.  Continuing to waste money when our nation should have other priorities is bad policy and bad for security.”

Think about the $610 million spent on just one F-35 plane—how far would that go to address the 10,000 homeless people who sleep outside in Atlanta every night?   Instead foreclosed homes crumble in southwest Atlanta while the homeless population has grown so large it’s now a large economic class of Atlantans. What could one or two F-35’s do for the 55% of Atlanta’s homeowners who are, on average, $66,496 underwater on their mortgages?

Mr. President, we appreciate that you have begun to publicly question the double standards so often applied to Pentagon spending.  Now the time has come for you to help the U.S. public understand the fiscal and human toll this double standard has wrought.

The end of the 1990s is remembered fondly as an economic heyday, a time when we saw budget surpluses and a thriving economy.  What is given less attention is that at that point, military spending amounted to less than half of what we spend now in inflation-adjusted dollars.  We could afford to invest in job creation, a sound safety net, education programs, and other priorities that built our nation’s most fundamental security needs.

But since that time, U.S. military spending has doubled—beginning well before the events of September 11, 2001. In fact, the Pentagon routinely struggles to spend all the money it is allocated, and ended FY12 with $100 billion in unused funding sitting in its bank accounts waiting to be spent.  Yet the Pentagon remains the only part of the federal budget not subject to audit, with documented levels of waste that far outpace the entire budgets of critical human needs programs.

Let’s cut what we don’t need so that we can protect the things we do, Mr. President.

If the sequestration deal is left intact, it still will only return Pentagon spending to 2007 levels -- a time when the U.S. was at war in two countries. That is an inadequate reset in the runaway Pentagon spending we have seen, extravagant spending that has ballooned the salaries of the top five defense contractor CEOs to an average $21.5 million apiece annually while millions of children in the U.S. aren’t sure where their next meal is coming from.

As you develop your FY14 budget, seize this moment to lead us toward real budget reforms.  Let’s bring our Pentagon spending back to the pre-war levels of 2002 and make needed investments in job creation, education, healthcare, and the environment.

Mr. President, this is your year.  You have all the hard-won experience of your first term under your belt, an experienced staff, and the momentum of a clear mandate from the November election.  It’s time to be bold and lead this nation toward new priorities—because there is no more room in the budget for what we don’t need.  What we do need is real  security: good jobs and schools, affordable health care, environmental protections to keep us safe from disastrous changes in climate, accountable institutions upholding justice for all.

We’re not broke – but this nation will become increasingly broken if we don’t change our budget priorities.