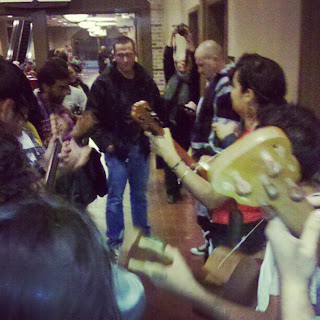 In one of the most dramatic moments at this year's School of the Americas Watch rally/vigil in Columbus Georgia, political hip hop group Rebel Diaz called out a group of eight undercover law enforcement officers at the Columbus Convention Center Saturday night while workshops, info shares, and other SOAW related activities where going down.

Members of the group recognized several of the officers from pictures taken over the last few years.

The officers where checking out the Killer Coke campaign table when Rebel Diaz tapped one of them on the shoulder and asked what organization they were with. The group had no response. The Rebel Diaz crew then called out the group as being undercover cops, and snooping on human rights activists. At first they stood there looking confused as a large crowd began to surround them. It was clear that the officers had attempted, poorly attempted, to blend in with the crowd. One of them was even wearing a pro-marijuana shirt. 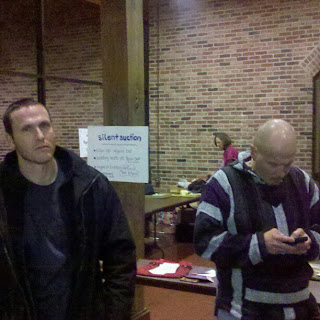 Finally the officer who appeared to be in charge admitted that they were in fact undercover cops who where assigned to run surveillance on the movement. Clearly the officers had been collecting information about all the various groups giving workshops and tabling at this years action.

Things got heated for a moment and nobody knew for sure what was going to happen next. The officers stood together, projecting a fairly cavalier attitude. What happened next was just pure joy. 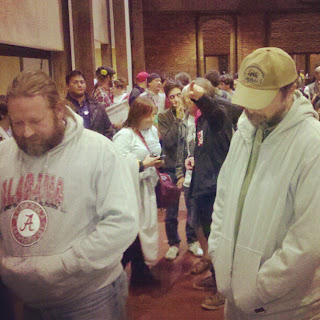 From around the corner, almost out of nowhere this beautiful group of young mariachi performers surrounded the cops and stared playing and dancing ensued, they were joined moments later by a puppet who danced around the cops. The tough cavalier attitude of the officers quickly transformed into confusion at first, and then what appeared to be shame. One officer actually seemed to be on the verge of tears.

What started out as a potentially scary situation was transformed into a beautiful moment. SOAW dominated the situation, while officers where forced out of the shadows. The officers where then corralled into the Killer Coke campaign's workshop where they were treated to a film screening about Coca Cola's human rights violations in Columbia, after which they left the convention center.