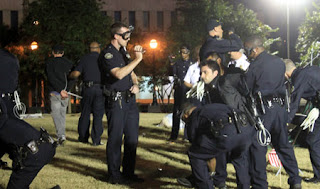 ATLANTA (October 12, 2012) – Sen. Vincent Fort has issued the following statement:
“After this morning’s hearing, it is apparent the city of Atlanta has not learned its lesson from the Atlanta Eagle and Katherine Johnson cases involving evidence destruction. The Atlanta Police Department had numerous cameras and recording devices present on October 25th and 26th, leading me to believe it would be impossible for all of the evidence to be destroyed or unavailable. A motion was filed today to dismiss this case based on APD’s destruction of evidence and refusal to comply with requests from our legal representation.
The public must ask themselves a question: Whose conduct is more egregious? The APD’s destruction of evidence or the peaceful protesters who were exercising their First Amendment right?”
A final Motion/Evidence hearing will take place on November 16, 2012. The trial is scheduled from December 17 – 21, 2012.